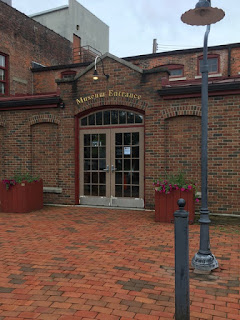 Like many organizations, our small and vibrant Chemung Valley History Museum, run by the Chemung County Historical Society, has been on #NYPause since mid-March. We're eager to reopen when safely allowed to do so and are working hard to make that happen. We want to hear your concerns, and if you haven’t taken our survey yet, we encourage you to do so.

While we pivoted to answer questions and post exhibits, talks and videos online, we believe in the power of original artifacts, documents and stories. The experience of seeing a physical object’s size, color, and material cannot compare to anything online, and we can’t wait to see you back in the brick building. 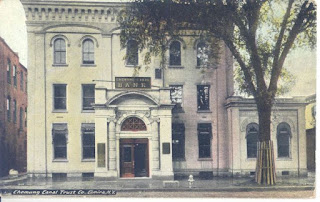 The distinctive building opened in 1833 as the Chemung Canal Bank, one of the area’s first banks. Brick buildings weren't common at the time, as most other buildings were made of wood, a cheaper and more plentiful material.

Making bricks is labor-intensive and the hand-crafted process can still be found in use throughout the world today. Technological advancements in the mid-19th century changed the industry. 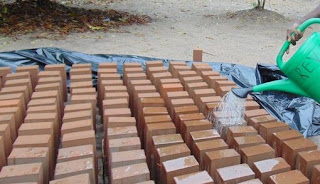 Investing in machines allowed large-scale brick manufacturing to improve the brickmaking process. Workers used various machines to help mine, mix and knead the raw materials, to press the mixture into molds, and to move the new bricks into high-intensity ovens to dry. Machines helped increase brick production and regulate brick quality. Producing more bricks meant building with bricks became a more affordable option. They also became more fashionable. Architects came up with ways to use bricks in decorative ways, softening the look of the ever taller and larger buildings.


Fire resistance was another good reason building with bricks became popular. Cities were growing in size and population, and closely built wooden buildings and structures were prone to fire. There were no official city Fire Departments, building codes and safety inspections yet. Sadly looking through old newspapers, it is common to see reports of devastating fires that wiped out entire city blocks, even into the 20th century.

In 1830, to save lives and property Elmira established its first fire company. It was an all-volunteer crew. The city's first professional fire department was adopted fifty-eight years later in 1878. Building codes for fire safety and inspection didn't show up until 1905. This was when the National Board of Fire Underwriters, a group of US insurance companies got together to come up with a National Building Code model to help minimize fire risk. Today model building safety codes are adopted by state or local jurisdiction and enforced by municipal fire departments. While brick buildings didn't prevent devastating fires, they were fire resistant. Building with brick was a good investment.

Mr. Albright established The Horseheads Consolidated Brick Co. in 1840. It  was one of the area's largest brickmakers. Considered one of the oldest industries in Horseheads, it churned out bricks for more than a century.
Early on, the Horseheads plant adopted the latest technological advances. They operated five molding machines which allowed them to produce up to 6 million bricks per year. The nearby Chemung Canal, opened the same year as the bank building, became critical in the company's growth. They used the canal to bring in raw materials and later to ship out the finished bricks. After the canal closed, railroads and trucks extended the company’s ability to ship bricks across the nation. Early 20th century production peaked to two million bricks a month, and the company employed seventy-five workers. Things slowed down and company changed ownership many times. It finally closed down operations in 1961.

Horseheads Consolidated bricks came in five different sizes: Standard, Jumbo, Roman, Norman and SCRSM sizes. The bricks were stamped with one of four different markings: H, H-H, HHDS, or the word Horse over Heads. This brick is on display in our museum:

Brick color depends on which blend of materials are used. Horseheads Consolidated offered four different colors with different blends of clay, shale, sand and oxides. Today we think of red bricks as standard, but red oxide bricks only became popular during Victorian times in England. They were reported to be the best color visible through London’s thick fog.