Wrong Side of History: The Anti-Suffragists

2020 marks the 100th anniversary of the passage of the 19th Amendment, which granted American women the right to vote. Since I’ve already written about the suffrage movement here, here, and here, I thought I’d write about the movement’s dark sister: the anti-suffragists.

It probably comes as no surprise to hear that there were many men opposed to women’s suffrage, but I was shocked (shocked!) to learn there were women opposed to gaining the vote. The Women’s Anti-Suffrage Association of Chemung County was founded by Mrs. Grace Alden Gregg for the express purpose of ensuring that the 1917 referendum to gain New York women the vote failed.  Gregg was the wife of attorney William W. Gregg, and, while she didn’t work, she was heavily involved in charity and social work through the First Presbyterian Church and the Y.W.C.A. She was joined in her fight against women’s suffrage by Mrs. M.H. Murphy, Mrs. H.H. Hallock, Mrs. W.W. Cole, Miss Helen McCann, Miss Flora Gannett, and Miss Mary Potter. Like Gregg, Murphy, Hallock, and Cole were the wives of well-to-do men and actively involved charity and social clubs.  Potter had been a schoolteacher and principal from 1873 to 1913, and regularly wrote educational articles for the Star-Gazette on various cultural and historical topics.

When the first women’s suffrage initiative appeared on the ballot in 1915, the majority of Chemung County voters were in favor, even though the referendum ultimately failed statewide. Throughout 1917, the anti-suffragists worked hard to change their minds. They took out advertisements in the local papers asking people to vote No. Mary Potter wrote a series of op-eds. They brought the famous anti-suffragist Miss Lucy Price to Elmira to speak to various men’s clubs and organizations. Every time the suffragists held a rally, the anti-suffragists held a counter rally. When the suffragists opened a booth at the Chemung County Fair, the anti-suffragists got a booth directly across from them. They even challenged suffragist leaders to a public debate which was politely declined. The Women’s Anti-Suffrage Association of Chemung County enjoyed community support, receiving $264 in donations, plus free space for meetings, free advertising on streetcars, and the use of 5 cars lent by local businessmen. 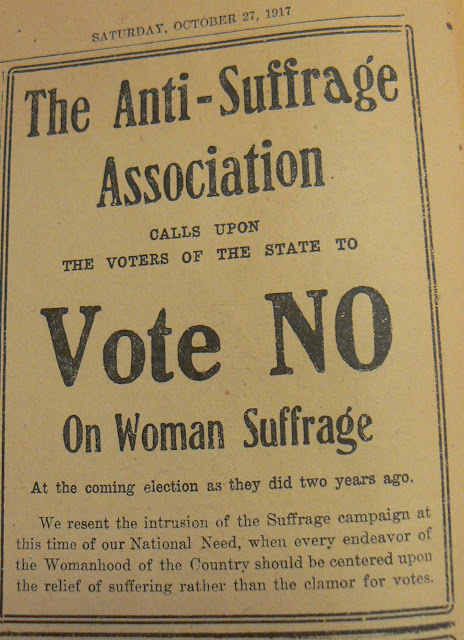 So, what were their main arguments against suffrage? Part of it was timing. In her op-eds, Potter specifically argued that the nation’s efforts should be focused on the war and that suffragists were an unpatriotic distraction. A lot of the argument against suffrage focused on traditional gender roles and a deep seated fear of change. Women, the anti-suffragists argued, were domestic angels who would be sullied by the nastiness of politics. Encouraging them to enter the public sphere could lead to the destruction of social norms which protected respectable women from rape and prostitution. Moreover, demanding the vote was tantamount to saying that the men in women’s lives were unable to properly represent women’s interests. Several anti-suffragists also claimed it was undemocratic to force the vote on those women who did not want it. 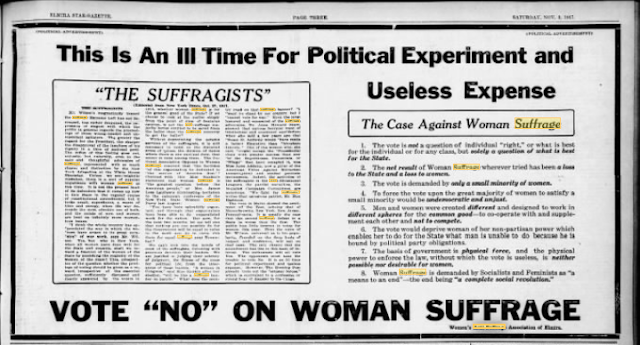 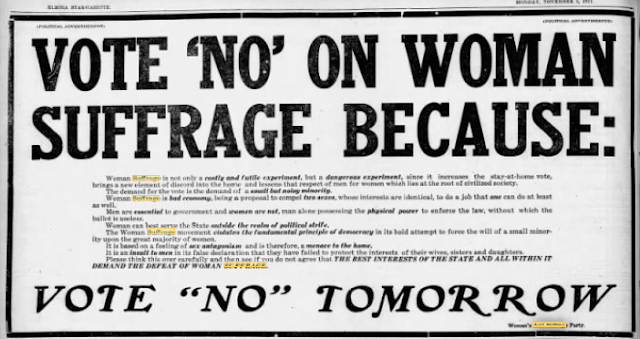 As silly as some of those arguments seem now, the Women’s Anti-Suffrage Association of Chemung County’s campaign actually worked. On Election day, November 6, 1917, Chemung County voted No on women’s suffrage, even as the rest of the state voted yes. Despite having lost the battle, some of the local anti-suffragists refused to give up on the war. Gregg, Murphy, and Gannett represented Chemung County at the national meeting of the Association Opposed to Woman Suffrage in December 1917 in Washington, D.C. and continued to work against the national suffrage amendment. It wasn’t until the 1920s, after the passage of the 19th Amendment, that Mrs. Grace Gregg finally bowed to the force of history and registered to vote.

Posted by Chemung County Historical Society at 6:10 AM