Bob Mack and the Rooster

It was 1882 and Haverly’s Colored Minstrels were playing Her Majesty’s Theatre in London, England. Up on the stage was Bob Mack of Elmira dressed as a giant Shanghai rooster, complete with vibrant green tail. Clucking and cawing, he faced off against a more conventionally sized bantam rooster called Little Dick. After several minutes of play fighting, Little Dick drove him from the stage and the crowd went wild. Up in the royal box, the Prince of Wales laughed himself silly. He was so delighted with the show that he later presented Mack with a gold medallion engraved with a rooster and set with diamonds valued at £20, quite a princely sum for the time.

Born into slavery in Kentucky around 1850, it was a long, strange road which brought Bob Mack before royalty. At a young age, he was set to minding the plantation’s poultry. It was there that he perfected the art of bird calls and mimicry. When the Civil War broke out, his master became an officer in the Confederate Army and dragged young Mack along as a body servant. In short order however, Mack found his way to freedom in the Union Army and amassed a small fortune entertaining the troops. After the war, he eventually found his way to Elmira were he fell for and married a local girl, Lucinda Washington, the daughter of the city’s first Black policeman.

Bob Mack worked as a barber, but his true passion lay in entertaining. Sometime around 1873, he performed his bird calls for the manager of Callender's Georgia Minstrels while they were in town and was hired on the spot. For the next ten years, he toured the United States and Europe, first with Callender's Georgia Minstrels and later with Haverly’s Colored Minstrels. Mack performed bird imitations, staged mock fights with Little Dick, and also kept a small flock of trained chickens who performed various tricks. In 1883, at age 2, Mack’s son Bob Jr. joined the act, often stealing the show with raw cuteness.

Minstrel shows developed in Northern states in the 1830s and 1840s with white actors in blackface portraying racist caricatures. The shows tended to follow a three act structure. First, a crowd-gathering parade would draw the audience to the theater. Bob Mack, evidentially a skilled horseman, often lead the parade for Callender's Georgia Minstrels. The show itself would open with a musical number featuring the entire cast followed by a group comedy routine and dance number. The second act was more like a variety show with a series of short, individual acts including music, dancing, acrobatics, etc. The second act was usually capped by a long stump speech delivered in dialect and filled with jokes, malapropisms, and puns.  The third act consisted of a short play, often times a plantation scene or sometimes a parody of a classic or popular contemporary play.

The shows were hugely popular throughout the 1840s and 50s, but were also considered controversial. Minstrelsy both played into and created negative stereotypes about Blacks and many African Americans were rightly appalled by it. Abolitionists worried that the shows’ sanitized depictions of plantation life and slavery undermined their cause. At the same time, many Southern cities barred minstrel acts due to their Northern origins. Interest in minstrel shows declined sharply during the Civil War and continued to do so throughout the rest of the 19th century. Blackface musical acts persisted until well into the 1960s, but the whole three act structure was lost. Still, a lot of the songs and racist tropes and stereotypes linger in our popular culture today.

Black minstrel troupes first started appearing in 1855. Callender's Georgia Minstrels was established in 1872 and was eventually acquired by J.H. Haverly in 1878. It was bought out again, this time by the Frohman brothers in the 1880s. Bob Mack worked for all three. The promoters of Black minstrel shows tended to highlight their authenticity, but, in reality, their content tended to be similar to white shows. Still, there were some key differences. Black shows often featured spiritual music and overtly religious themes in a way which the white shows did not and usually ended with a mock military drill and brass band. While many Blacks avoided white minstrel shows, they attended Black minstrel shows in droves and tended to treat the performers as celebrities. 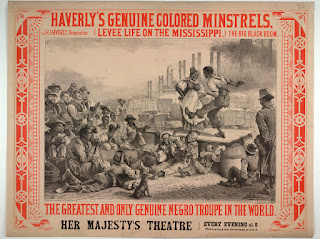 For Black entertainers like Bob Mack, Black minstrel shows were pretty much the only large-scale avenue towards show business and fame. As a Black man, Mack made a fraction of what white entertainers made, but it was still more than he ever could have hoped to make as a barber. When he died of tuberculosis in Elmira on January 21, 1885, he was one of the richest, if not the richest Black men in Elmira. He is still regarded as one of the best chicken trainers and his signature rooster outfit was recreated by Bert Williams for the 1910 Ziegfeld Follies and for Barbara Streisand’s TV special The Belle of 14th Street in 1967. He is buried in Woodlawn Cemetery and his descendants continued to live in Elmira throughout the 20th century.

Posted by Chemung County Historical Society at 6:18 AM