A Bit of Serendipity: The Duane Thompson Story


Back in July of 2011, the Archives received a large collection of images from the 23rd New York Volunteers, a Civil War unit recruited from across the Southern Tier including Chemung County.  In fact, the Company K of the 23rd was the county’s first Civil War unit and was formed entirely from men who joined at a rally in Elmira in May 1861.  The unit agreed to serve for 2 years, but many surviving members ended up reenlisting in other units once their terms of service were up.  A number of famous locals including Judge Seymour Dexter and Col. Henry Hoffman served in the 23rd.
A few months after I received the photographs and began to catalog them, I received a letter sent from Duane Thompson, a Civil War soldier in an unspecified regiment, to his father Henry Thompson of Southport. The letter had been transferred to us from another historical society in the Finger Lakes and they wanted to know who Duane Thompson was.  So, I did some digging, found some information on his family and passed that information along.

Now, here we are a few months after that and I have finally finished cataloging all 75 items in the 23rd New York material and what do I find?  This - 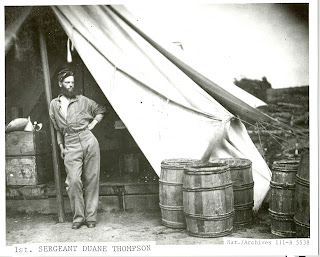 That’s right.  It’s Duane Thompson, the mysterious letter writer.  Turns out he was the 1st Sergeant of Company K of the 23rd New York Volunteers.  Now we can put his letter in context and a face to a name.  Isn’t history awesome?!
Posted by Chemung County Historical Society at 3:59 PM