This month marks the 40th anniversary of the ’72 Flood.  To commemorate the flood we have a variety of activities planned at the museum, through our Facebook page and on our blog.  On Thursday June 21 the exhibit Memories of the ’72 Flood opens in the Barn Gallery.  Everyone who lived through the flood has a story.  Through images, objects and oral histories, Memories of the ’72 Flood shares those stories.   In addition to viewing the exhibit, during the opening visitors can listen to period music, share their own flood story and attend “Don’t Blame The River,” a panel discussion sponsored by the Friends of the Chemung River Watershed.  The June edition of The Chemung Historical Journal features articles about the flood as seen through the eyes of emergency responders and the Chemung County Historian Archie Kieffer who was the Superintendent of Buildings and Grounds for Chemung County in 1972.  Our Gift Shop specials continue with the flood issue of the Journal (August 1972) on sale for $3.00.  On Facebook we are asking people to help us locate flood level markers that were issued by the historical society, sharing flood photos from the Booth Library and providing a day to day timeline of the flood.  Throughout the month look for posts here about Operation Rebuild and tips on how to care for water damaged collections. 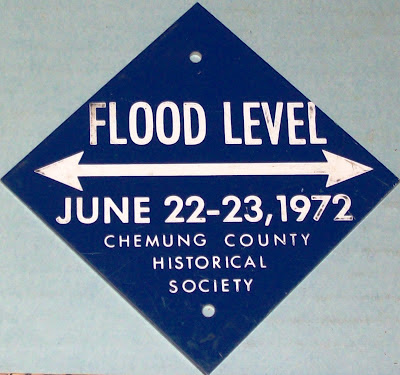 As we were preparing for Memories of the ’72 Flood, I got extremely curious about Chemung County’s flood history.  My curiosity got the better of me and I discovered a few things.  It should be no surprise, that there have been floods throughout the county’s history but there is a difference between ‘smaller’ floods which never cause much damage and ‘major’ ones that cause damage.  Perhaps this quote from a ’72 Flood oral history explains it best  – “We had been through a lot of floods but had never seen anything like this.  This flood was just unbelievable.  It went up a foot then another  foot and another foot and it just kept coming and it just did not stop.  And most floods you would see recede by the next morning and you wouldn’t have any water there and it would be gone.”


There have been over 23 recorded major floods in Chemung County’s history.  The first recorded flood was in 1784.  Another fact I discovered is that people in the 18th and 19th centuries liked to name the floods.    The 1784 was the Ice Flood. 1833 had the Great Inundation (1833) and the Tremendous Flood occurred in 1861.  There were even several Pumpkin Floods where pumpkins actually floated down the Chemung River.  During the 1817 flood pumpkins made it all the way to Wilkes Barre, Pennsylvania.  Can you imagine!  1857 wasn’t a very good year as there were 3 floods in June, July and November.  The worst recorded flooding in the 19th century was the St. Patrick’s Day Flood of 1865.  Since snow began falling in October 1864 and pretty much never let up, it should not have been a surprise that the Chemung River flooded once the snow began to melt.  Lower areas of the Confederate Prison Camp (mainly the small pox hospital) were evacuated while in the higher areas prisoners were ordered to stay on the second and third tiers of their bunks (where they remained for two days).  The flood even washed away 2,700 feet of the camp’s stockade wall.


Beginning with St. Patrick’s Day Flood it seems each new flood “topped” the last one.   Not only that but it seems several floods were followed by more inclement weather.  The Flood of 1889 topped the St. Patrick’s Day Flood.  The Flood of 1902 topped 1889.  After two days of flooding in March 1902 the area was hit by sharp temperature decline and a snowstorm.  I should point out the mayor of Elmira at the time was Frank Flood.  The Flood of 1946 topped 1902.  In May and June 1946, five days of rain were followed by flooding which was then followed by 2 severe windstorms.  Of course the ’72 Flood topped 1946.


My favorite flood story is simple flood marker kept by Asa Parshall showing flood crests near Katydid Curve in Chemung.  Mr. Parshall’s marker - a tree!
Do you have a flood story?
Posted by Chemung County Historical Society at 11:49 AM