Following the devastation caused by Hurricane Agnes in June 1972, the Southern Tier was flooded with volunteers from all over the northeast.  Organizations like Mission Possible, a group based out of Our Savior’s Lutheran Church in Horseheads, helped to supply and coordinate their efforts. Two of the volunteers who worked with Mission Possible were John Dickson III and Edward Wheeler of Rochester.  The pair worked for Eastman Kodak as part of their facilities maintenance and construction crew.   In the first three months following the flood, John and Edward worked in Elmira nearly every day, shoveling out mud from people’s homes and removing debris from their properties until they had used up all of their vacation time. 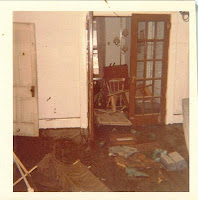 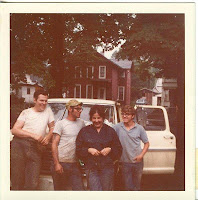 There was still a lot of work that needed to be done.  The flood caused extensive damage inside homes, ruining insulation, frying electrical wiring and destroying appliances like furnaces and water heaters.  Unlike the clean-up, these repairs couldn’t be done by just anyone, so Mission Possible reached out to various regional companies including Kodak, Xerox and NYSEG asking them to send skilled work crews to help in the Elmira recovery effort.  In the end, Kodak sent nearly 100 of their maintenance and construction personnel to Elmira’s Southside as part of their top secret project, Operation Rebuild.


The work for Operation Rebuild was done by Kodak employees and was jointly funded by Kodak and the Catholic Charities of Rochester.  Once again, Our Savior’s Lutheran Church coordinated the efforts while St. Joseph’s Hospital provided the workers with food and Elmira College provided them with shelter.  Two local businesses, LeValley McLoud Inc. and Robinson Lumber Co., agreed to sell supplies to Operation Rebuild at highly discounted rates.  Throughout it all, Kodak took pains to keep their involvement in the project a secret.  While the men used company trucks, they made sure to cover over the company name and logo.  Kodak asked the employees they sent down not to reveal who they worked for.  The whole operation was a vast conspiracy of good that, for whatever reason, they didn’t want their name attached to.


Operation Rebuild ran from September 1972 to the end of the year.  In that time Kodak employees worked in an official capacity on 78 homes, mostly owned by the elderly or infirm, and volunteered to help on many more.  They installed furnaces, rewired electrical systems, replaced ruined insulation and dry wall and, in one case, essentially rebuilt a house from the ground up.  Operation Rebuild indeed.

Posted by Chemung County Historical Society at 7:09 AM