In July and August the museum is hosting Trolley Into Twain County Tours.  On Tuesdays through Saturdays people can catch the trolley at the museum and go on an hour long, narrated tour of Elmira.  Sites include Mark Twain’s Study, Woodlawn Cemetery and the Civil War Prison Camp.    I thought this would be the perfect opportunity to explore the county’s trolley history.


On August 23, 1871 the county’s first trolley line opened.  Operated by the Elmira and Horseheads Railway Company, horse drawn cars traveled between Elmira and Horseheads.  Rides within Elmira were five cents while travel to and from Horseheads was fifteen cents.  Other trolley companies were quickly established. 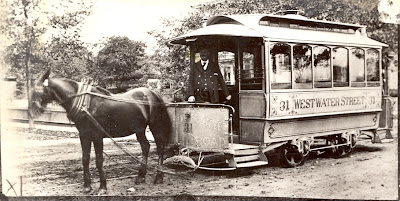 ·        The Maple Avenue Railway was part of a real estate project to develop Maple Avenue.  On August 30, 1890 going between 12 and 15 miles an hour, the railway became the first to have an electric trolley in Chemung County.


·        Residents along West Water Street contributed money to have a one mile track between Main Street and Foster Avenue.


·        Known as the Glen Route, the Elmira and Seneca Lake Railway Company made trips between Horseheads and Watkins Glen.


·        Since trolleys were not equipped with bathrooms, the Elmira, Corning and Waverly Railway could not provide non-stop service from Waverly to Corning, passengers had to change cars in Elmira.  A popular activity on this route was shipping canoes on the cars to Corning and paddling back to Elmira down the Chemung River. 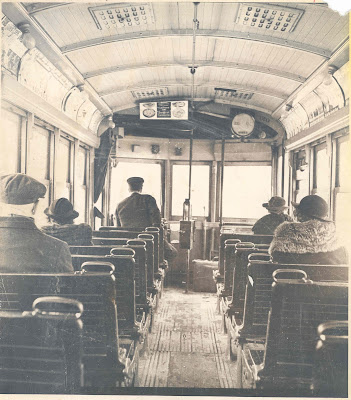 The period between 1890 and 1939 is called Elmira’s Trolley Car Era.  Connecting people, places and events, the trolleys were the life lines of the community. With five cents (during World War I the fare increased to six cents) and routes running every fifteen minutes, one could go practically anywhere within the county.   During the summer open cars left for Rorick's Glen every 7 ½ minutes and double deck cars transported people to Eldridge Park.  The Hotel Rathbun (now the Chemung Canal Trust Company on Water Street) had special tracks from its Baldwin Street side to the Erie Railroad Station so hotel guests could be transported by a special yellow trolley to and from the hotel.  People choose homes based on distance from a trolley line.  There were even trolley parades where people traveled to an event in decorated trolleys.   1919 was a record breaking year for trolley fares.  In that year alone there were 10 million fares (this broke the previous record of 8 ½ million fares set in 1913). 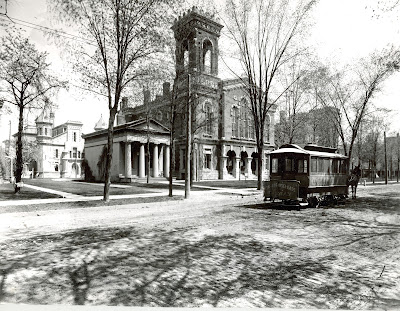 By the early 1900s most of the trolley companies were consolidated under the Elmira Water, Light and Railroad Company.  Not only did the company control transportation routes, but the water and electric light utilities as well. 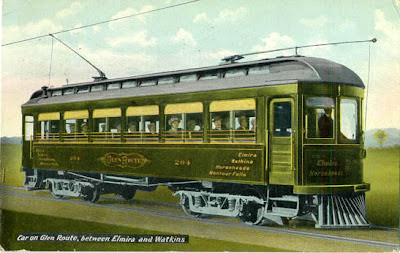 Like most things in life, all good things must come to end.  With the increase use of cars and the introduction of bus lines people rode the trolleys less.    On March 11, 1939 Car 501 made Elmira’s last trolley ride. To commemorate the event, the Chamber of Commerce staged a parade.  Pulled by a team of horses, Car 501 led a procession of three bands and several buses from City Hall to Third Street to the car barn on East Fifth Street.  The crepe decorated car had a “To Graveyard” sign on the front and “Good-by, Elmira” on the back with its roll turned to “Home for the Aged.”   At 4:16 pm the car barn reported that the trolley had completed its route and the order was sent to Fred B. Reynolds to turn the power off.  Nearly forty-six years earlier Reynolds had turned the power on for Elmira’s first electric trolley. 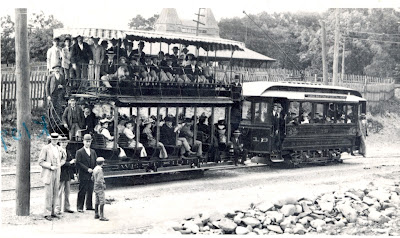