I Bring Unto You Good Tidings of Great Joy 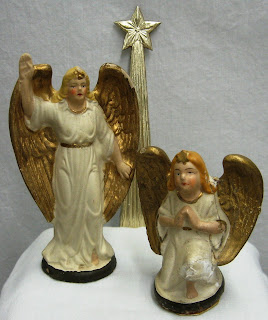 The image of the baby Jesus lying swaddled in a manger surrounded by Mary and Joseph, magi and shepherds, angels and animals is an icon of Christmas.  The nativity scene or crèche has been reenacted in public and recreated in homes for centuries.  The first “living” nativity was said to have been staged by Saint Francis of Assisi in a cave near Greccio, Italy in 1223 to remind people of the true meaning of Christmas.  The living nativity was picked up by churches and the nobility who created ever more elaborate scenes. Today, it is standard at  most Christmas pageants.  The Radio City Christmas Spectacular in New York City concludes with the presentation of the nativity, featuring live camels and sheep.

The first static nativity scenes, composed of carved wooden figures of the holy family and attendants, appeared in Italian churches in the 1300s.  The nativity remained set up all year long on a side altar or chapel and was decorated for the Christmas season.  As with the living scenes, the static nativity was also adopted by the nobility and aristocrats.  By the mid 1500s the scenes were highly artistic with rich clothing on the figures.  The tradition of setting up the nativity for Christmas has spread through practically all Christian nations, with each culture adding its own style.  Both Catholic and Protestant families in Germany in particular adopted the nativity into their traditions, placing the baby Jesus into the manger on Christmas day. 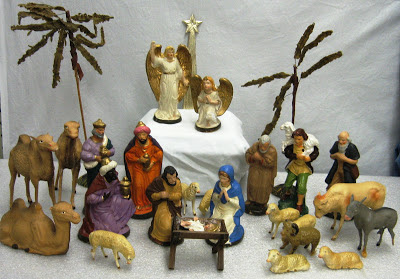 The Museum has in its collection one nativity that was donated in 1972.  The painted ceramic figures were made in Germany sometime in the late 19th-early 20th Century.  The set consists of Jesus, Mary and Joseph, two angels, the three wise men or magi and their camels, three shepherds, eight sheep, an ox and an ass which are also traditional figures, two palm trees and a star.
Posted by Chemung County Historical Society at 7:57 AM