Black Friday and Cyber Monday may be over, but we certainly haven’t seen the last of this shopping season.  It’s easy to wax nostalgic about a bygone era when we weren’t bombarded by constant ads and Christmas music in October but let’s be honest.  For the last 100 years, Christmas and commercialism have gone together like chocolate and peanut butter.  There may be more media to saturate with advertisements and, yes, the carols are starting earlier, but for as long as anyone reading this blog has been alive the Christmas shopping season has been a force to be reckoned with. 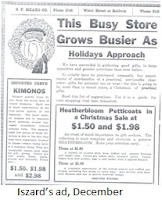 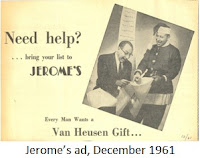 While Jerome’s certainly had the most whimsical ads, the S.F. Iszard Co. probably had the best deals.  I mean, hand embroidered crepe kimonos from Japan for less than $2.98, talk about savings.   Of course, advertising wasn’t the only trick to getting people into downtown stores.  The Macy’s Thanksgiving Day parade in New York City began in 1924 as clever bit of marketing.  In 1957, the Iszard’s family borrowed the idea.  By the second year alone they had over 5,000 people in attendance.  The store would be closed during the parade, but would be open for business as soon as Santa dismounted his float to hold court in Iszard’s Toyland and officially kick off the Christmas shopping season.
Once they got the customers in the doors, Elmira’s downtown department stores worked to bring the holiday cheer, or at least the holiday decoration.
Now, it may seem to some like I’m favoring Iszard’s and Jerome’s over, say, Rosenbaum’s, Gorton Coy and Elmira’s other fine former retailers and, well, I am.  After all, the Jerome and Iszard families were kind enough to give us boxes of their stuff, so I might as well use it.