When I was researching alternative medicine providers for our upcoming medical exhibit, I came across Mrs. R.H. Wilcox, a clairvoyant physician.  Given my fondness for historical eccentric folks, this was a topic I couldn't resist.  Mrs. Wilcox is a great lens through which to examine not only the presence and popularity of clairvoyants and mediums locally, but also within the larger context of the spiritualism movement.


The significant number of clairvoyants in Chemung County in the late 19th and early 20th centuries makes a lot of sense because spiritualism originated in Western New York.  This area, known as the "burned-over district," was the birthplace of several religions during the Second Great Awakening (1790-1840), including Mormonism, the Millerites, and the Oneida Community.  Spiritualism is traced back to the Fox sisters from Wayne County.  Beginning in 1848, the Fox sisters claimed to be able to communicate with spirits through mysterious "rappings."  The sisters traveled around performing séances and became famous.  However, in 1888 they admitted they were frauds.  Still, spiritualism remained popular and many men and women claimed to have supernatural powers.


The earliest clairvoyant I have found mention of from Chemung County was Madame F.M. Du Bois.  Du Bois maintained her practice on Water Street in Elmira and she appears as a clairvoyant in city directories in the late 1860s.  Madame Du Bois even was involved in a dramatic incident that was still part of popular memory decades later: in the late 1860s or early 1870s, she disrupted the marriage ceremony of her alleged lover, Harwood Badger.  Du Bois claimed to be "spiritually united" and married to Badger.  When Du Bois was forcibly removed from the room, she allegedly proclaimed that she would "seek to injure them as long as she lived, and would haunt them if she could after her death."  Some Elmirans believed the curse had its intended effect as the bride and groom were rumored to have an unhappy marriage and legal troubles.


Most of Elmira's other clairvoyants were decidedly less dramatic.  Among these practitioners were Mrs. J.E. Allen, Jane Gibbs, and Mary Stroman.  They advertised in newspaper classifieds. 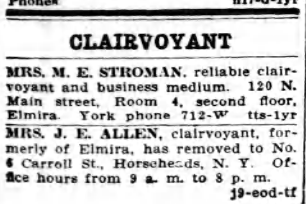 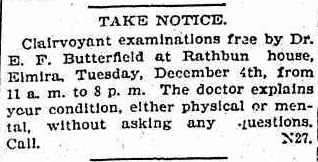 Other local spiritualists specialized in clairvoyant medicine.  The basic tenet of clairvoyant medicine appears to have been the ability of the practitioner to diagnose a patient without asking a single question.  Dr. John P. Jennings and Mrs. R.H. Wilcox were both practicing clairvoyant physicians in Elmira during the 1870s and 1880s.  While we know little about Jennings, there is some information available about Wilcox.  In CCHS' archives, we have two of her hand-written diagnosis reports and one of her medicinal recipes (one of the main ingredients was gin).

Wilcox occasionally practiced outside of Elmira and she did special residencies in Watkins Glen or Corning where she would meet patients who would be otherwise unable to visit her in the city.  She was billed as having been "met with unequalled success in her diagnosis of disease, and in the efficacy of her prescriptions—her work is regarded by many as a noble, devoted one, and as proving a great blessing to suffering humanity."


Despite tales of her successes, some people remained skeptical.  When Wilcox's mail, and the money it contained, was stolen, the Geneva Courier had some fun at her expense: "The Doctor's letters from misguided patients, were abstracted from the Post Office, the money in them confiscated and it was impossible for ordinary mortals to tell what became of them and the Dr. was in the same unfortunate predicament."  A young man, James VanOver, from Elmira, was eventually arrested for the crime when police staged a sting operation at the Post Office.  Wilcox continued to practice until her death in 1883 (and perhaps in the afterlife, as well...).

Posted by Chemung County Historical Society at 6:41 AM