A couple of weeks ago, we posted the cover of a dance card from the Kelvin Scientific Society in 1916 on Facebook.  Until then, I admit, I had never heard of the Kelvin Society, as I suspect many others hadn’t.  After doing some digging, I found that this Kelvin Society had quite an interesting history.

The Kelvin Society was founded by Lillian Belle Herrick in 1897.  Herrick was born in Horseheads on June 9, 1872 and was one of five children (Lillian had a twin sister named Millian, who sensibly went by Millie).  After she graduated from Elmira College in 1894 with a degree in chemistry and physics, she taught science at the Elmira Free Academy (EFA).  At EFA, Herrick helped expand the science department and was noted to have constructed and operated the first Marconi wireless telegram in this area.
[In an interesting side note, Herrick left the school in 1908, when she married her husband, Rev. William Chapman, and she became ordained as a Presbyterian minister. She was the first female Presbyterian minister in the country, but the State synod revoked her license in 1919 because it didn’t recognize female ministers.  She was then ordained in the Congregational Church serving as a pastor at Park Church and in Big Flats.  She had an incredibly active career and died at age 92].

The group was both scientific and social.  They met every two weeks to discuss the latest scientific work, but every third meeting was strictly social.  The Kelvin Society was open to both boys and girls at EFA.  They had guest lectures and also took scientific inspiration from the city.  For example, in 1900, they spent the year studying the science of local factories and foundries.   They also had meetings at their cottage by the Chemung River, referred to in this photograph as “the Shack.” 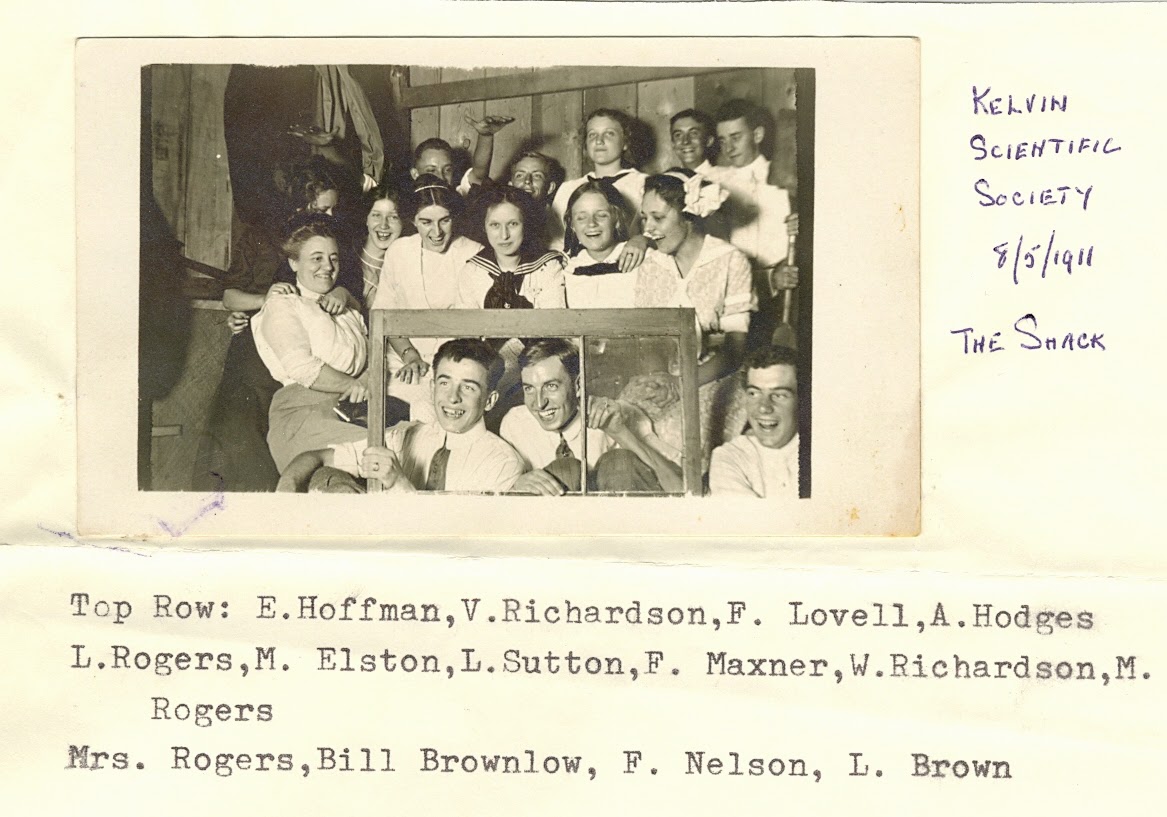 The Kelvin Society was named after William Thompson, 1st Baron of Kelvin.  Lord Kelvin was an influential British scientist for whom the Kelvin unit of measure is named.   Lillian Herrick attended a banquet in his honor at Cornell University in 1902.  The next month, the Kelvin Society received a personalized letter from their namesake.  This wasn't their first brush with scientific celebrity, however; four years earlier, the group received a letter from Thomas Edison. [Learn about another Thomas Edison connection to Elmira here]

By 1909, the group had been pushed out of their meeting space at EFA (due to some school rule change) and they began meeting at members’ homes.  Although the Kelvin Society continued on until at least the 1930s, they do not appear in the EFA yearbooks after 1911.   Perhaps the Kelvin Society broke from the school and became an independent entity at that point.  They remained active, posting notices of their meetings in the local newspaper.  One of their most popular events remained their New Year’s dance.
﻿﻿
﻿
﻿﻿﻿﻿﻿The last mention I can find of the Kelvin Society is from 1934.  That brief article in the Star Gazette optimistically noted resurgence in participation, but seemed to indicate that interest in the group had waned over the years.  If anyone knows if the Kelvin Society lasted for longer, I would love to hear about it.
Posted by Chemung County Historical Society at 6:19 AM