CCHS at the Museum Association of New York Conference

Last Sunday-Tuesday (April 12-14), most of the CCHS staff attended the annual Museum Association of New York (MANY) conference, held in Corning this year.  In those three days, we were featured on three separate panels, received two awards, attended other sessions, and went to special breakfasts, lunches, dinners, and networking receptions.  We also were able to catch-up with old friends in the field, while meeting new colleagues.  All told, it was a great time!  Here's a quick recap of what we learned and did. 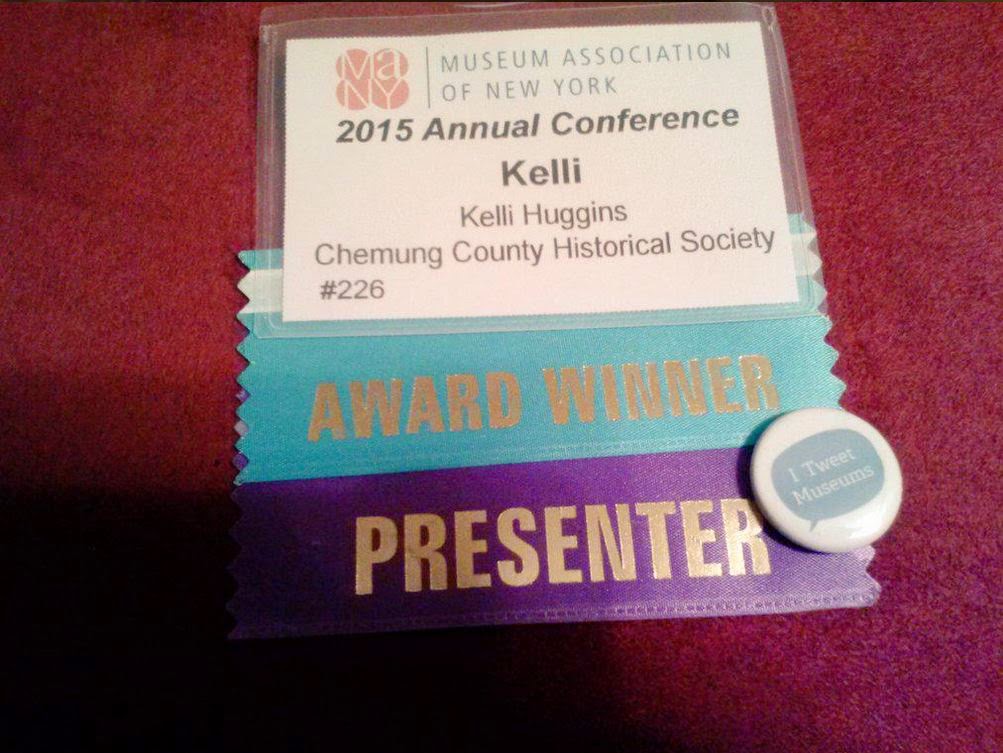 This year, CCHS was selected to receive two Awards of Merit, given by MANY to acknowledge "outstanding programs and individuals who have made the state's museum community richer and more relevant. They reward the innovative efforts of staff and volunteers and they provide encouragement for the development of new and remarkable projects."  First, we received the Award of Merit for Innovations in Interpretation for our new History They Didn't Teach You in School series. 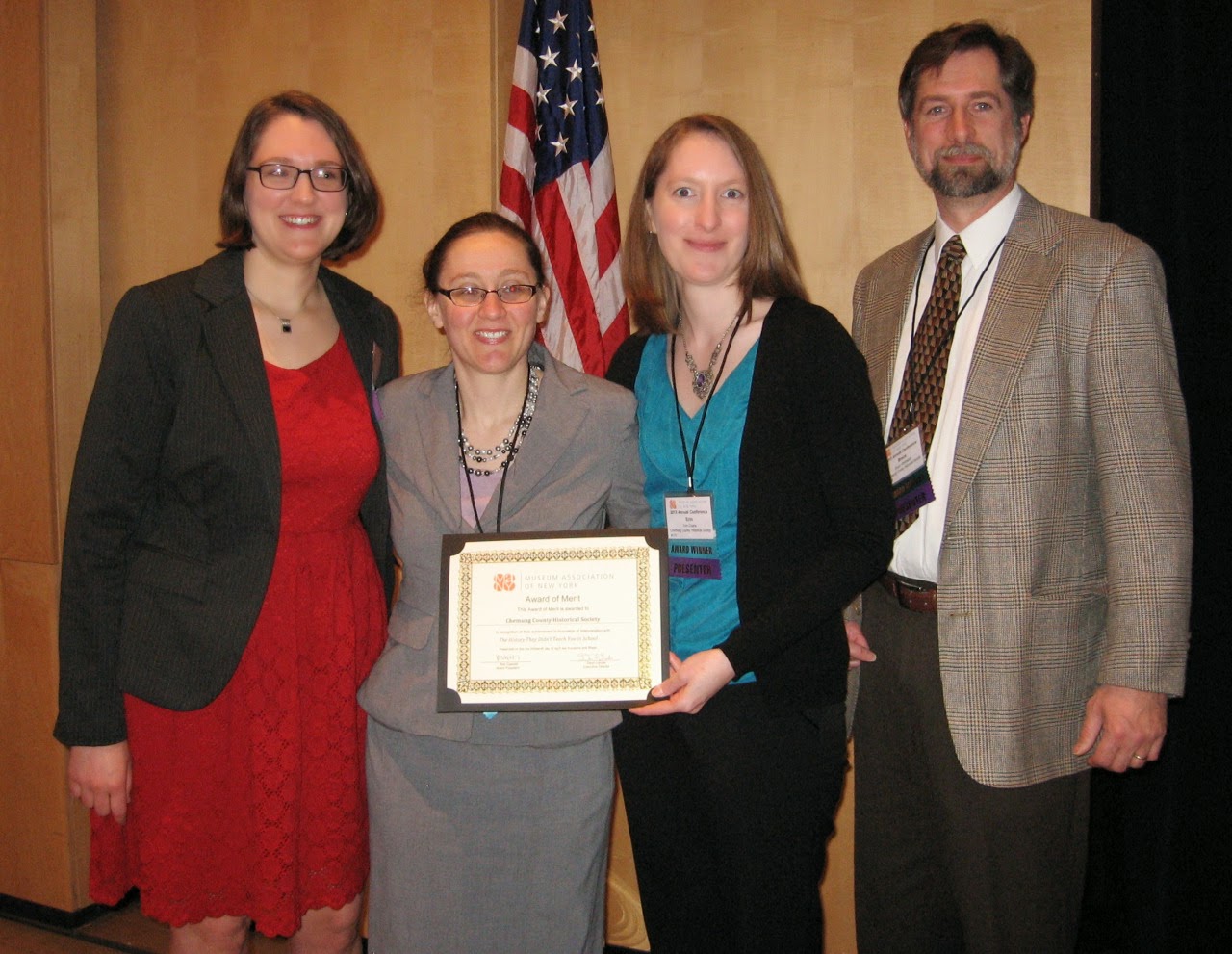 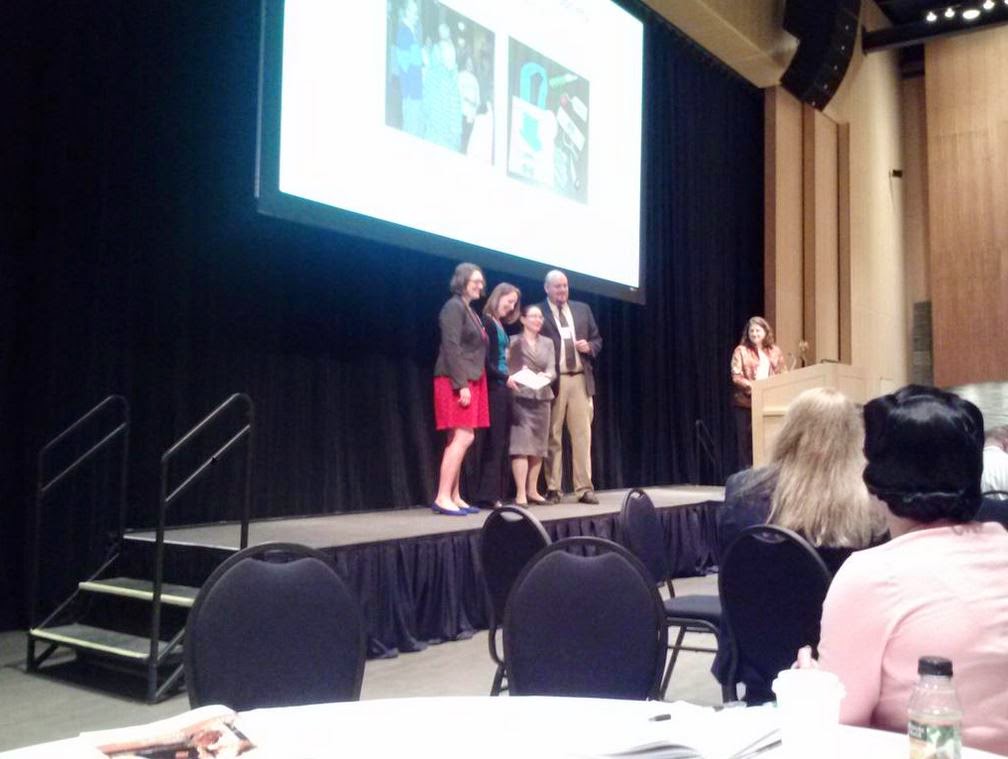 I also received the Rising Star Award of Merit for my work at CCHS creating new programming and reaching out to new communities. 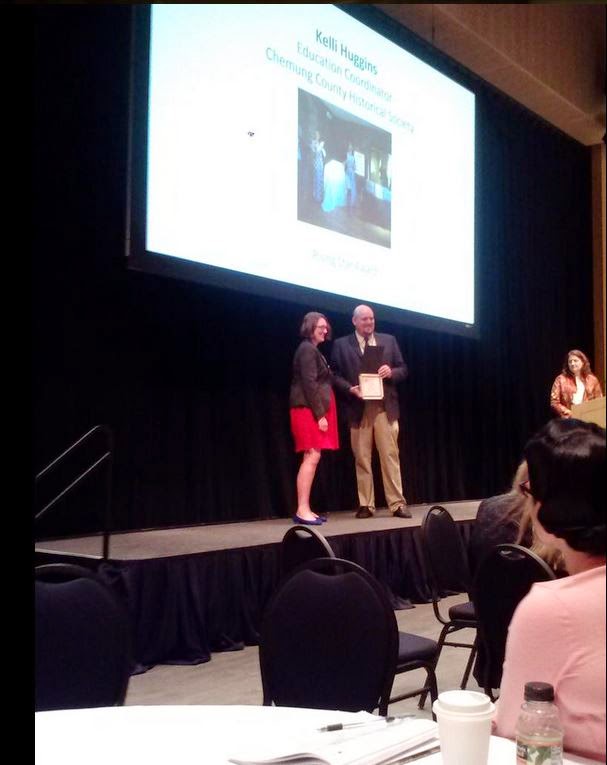 The CCHS staff also presented on three panels.  Director Bruce and Curator Erin organized a panel called "Rethinking Outreach by Moving Outside of the Museum."  The panel also featured Pam Davis-Webb, Principal of Diven Elementary, and Louise Richardson, Communications and Marketing Manager at the Chemung County Humane Society and SPCA.  The panel discussed the efforts that our staff has made to work with non-traditional community partners.  The audience at the panel was very interested in the discussion, with some attendees saying they wanted to try to use these ideas at their own museums.
I organized another panel, called "Making Your Mark in Our Digital World: Museums and Creative Social Media Use."  The panel also featured Yvette Sterbenk, Senior Manager of Communications, Corning Museum of Glass; Bridget Sharry, Community Relations Manager, Tanglewood Nature Center and Museum; and Rachel Bournique, Student, Siena College.  We discussed best practices and management techniques for social media and also how to use different platforms creatively.  I brought Mark the Mammoth our museum mascot to discuss how we've used Mark to tap into an international museum community on Twitter (find Mark's Twitter account here: https://twitter.com/MarktheMammoth).  We got a great response to the panel: it was standing room only and I got lots of feedback from sites that want to create their own museum mascots.  Mark the Mammoth also live-Tweeted the entire conference using the official conference hashtag #MANY2015.
Curator Erin also participated on a panel about deaccessioning.  This is a tricky issue for many museums and Erin's first-hand experience was helpful for museum professionals dealing with deaccessioning items in their collections.
This conference also allowed our staff and museum professionals from around the state to explore the beautiful Corning Museum of Glass (CMOG) and Rockwell Museum, our gracious hosts. 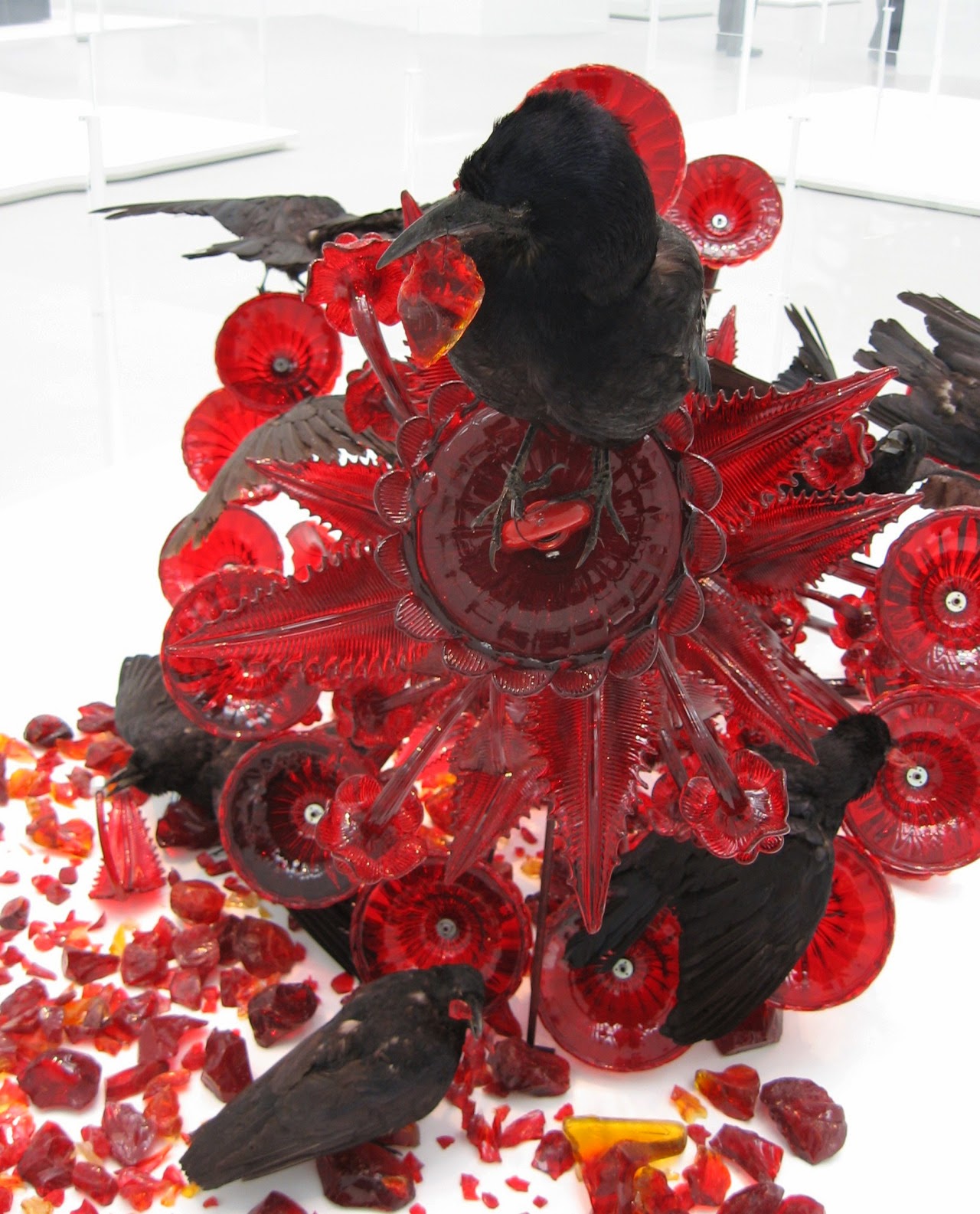 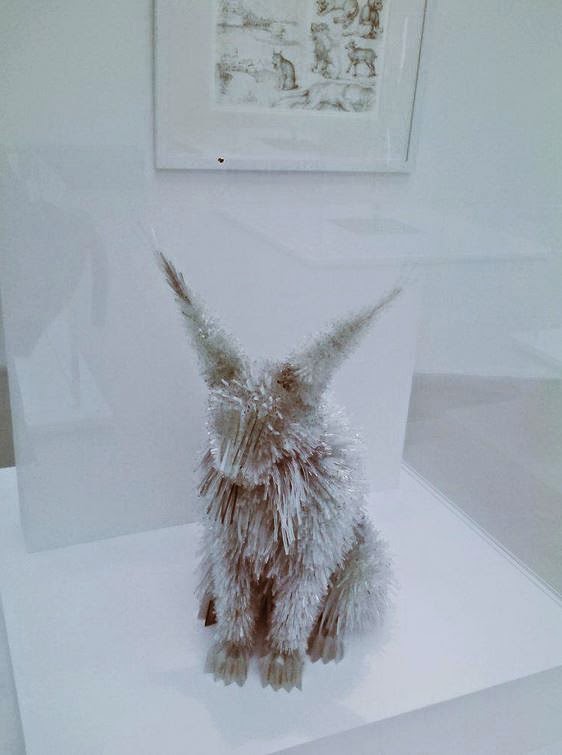 CMOG hosted a fun opening reception complete with a live glass-blowing demonstration in their new auditorium. 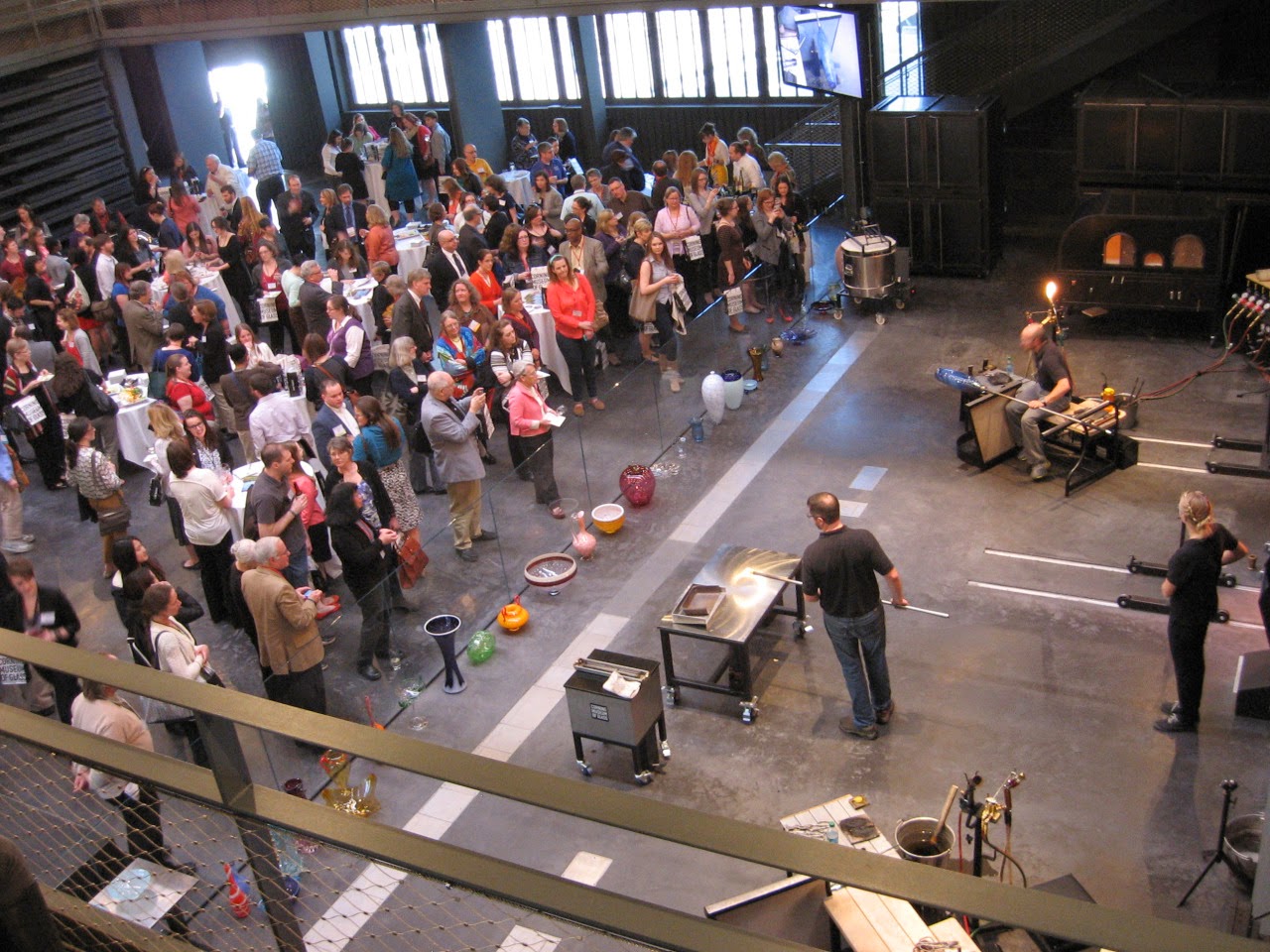 At the end of the three day conference, we all had many new ideas that we want to use at CCHS.  We attended great panels on everything from design tips, to Common Core standards, to promoting regional tourism.  We hope to use these ideas to create even more innovative, creative, and meaningful experience for our visitors and members.  The staff is already making plans for next year's conference in Lake Placid.


On top of that, make sure you congratulate Director Bruce the next time you see him: he was recently elected to the board of MANY!
Posted by Chemung County Historical Society at 5:07 AM