The Titanic and the Arthurs Ford 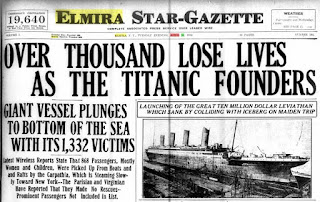 When news of the full extent of the Titanic disaster broke in Elmira on April 16, 1912, two families began to worry about the fate of Arthur Ford. The strange thing was, they were worried about two different Arthur Fords. 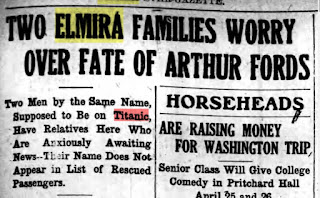 Arthur Ford the elder was the brother-in-law of Charles F. Thompson, the secretary and treasurer of the Elmira Produce Company. Ford was a resident of Petersboro, England, where he lived with Thompson’s sister. Despite the distance, the couple visited Elmira frequently, mostly owing to Ford’s job. For over a decade, Ford had served as a steward and storekeeper on the White Star shipping line. He normally served aboard the RMS Oceanic, but, in anticipation of her maiden voyage, White Star had pulled more experienced crewmembers off their usual ships to serve on the Titanic in order to train the newbies. The last Thompson had heard; his brother-in-law Arthur had been one of the transfers.

Arthur Ford the younger was the brother of William Ford of 464 Lyon Street. William had immigrated to America from England and settled in Elmira seven years earlier. Life here had been good; he’d married a local girl and started a profitable carpentry business. At 23, young Arthur was the last of his siblings to leave home and William urged him to come to Elmira to join the family business. Although initially reluctant to leave their ailing mother alone back in London, Arthur was eventually convinced. He boarded the Titanic as a third-class passenger in Southampton on the morning of April 10th.

A list of third class passengers and crew rescued from the wreck by the Carpathia was published in the Elmira papers on April 18th.  Neither Arthur Ford was on it. The following day, Charles Thompson received word that his brother-in-law was headed to New York aboard the Oceanic. The Thompsons could rest easy. All the Fords could do was grieve. 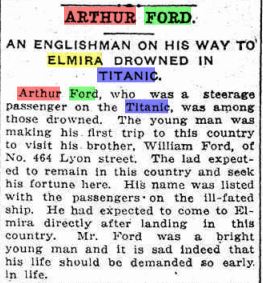