The first Memorial Day was celebrated on May 30, 1868 in honor of the Civil War dead, so it seemed fitting to feature the 107th New York Volunteers Association’s scrapbook today. In the aftermath of the Civil War, veterans formed a number of organizations. The biggest of these was the Grand Army of the Republic (G.A.R.) which included veterans of the Union Army, Navy, and Marines with over 490,000 members at its peak. Chemung County was home to three different G.A.R. posts. In addition to being a fraternal organization where members could hang out and talk about their undiagnosed Post Traumatic Stress Disorder, the G.A.R. was also one of the nation’s first political action groups. They lobbied Congress to make Memorial Day a national holiday and worked in support of pensions for veterans, voting rights for blacks, and Republicans for office. 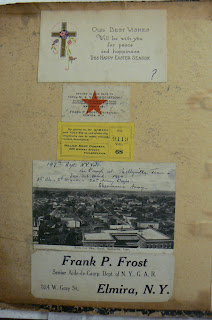 The 107th New York Volunteer Association was formed in 1866 to give veterans of the 107th  an excuse to get together.  Mustered in at Elmira on August 13, 1862, the 107th New York Volunteers was made up primarily of men from Chemung, Steuben, and Schuyler Counties. They fought at Antietam, Gettysburg, and during the Atlanta campaign. The monument which stands in front of the Chemung County Court House on Lake Street is dedicated to them. The Association hosted its first annual reunion a year after the end of the war. In the early years, annual meetings involved picnics and hiking. By the turn of the 20th century, they were mostly having dinners at the Armory on Church Street. 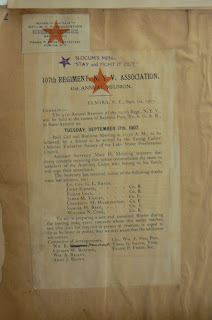 They kept two organizational scrapbooks, one covering from 1862 to 1905, and the other from  1907 to 1930. The first book is more of a ledger of meeting minutes interspersed with newspaper accounts of their annual reunions. The second scrapbook has a bit more in terms of variety. It contains meeting announcements, photographs of members and events, ephemera, and articles related to the Civil War. In some ways, it’s a little sad. By 1907, most of the members were in their 60s. As the decades progressed, more and more obituaries filled the pages. By 1930, most of the original members were dead. 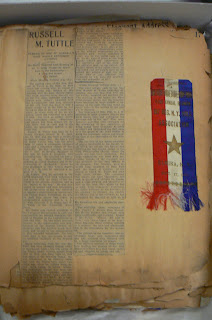