A Walk in the Park

It takes less than ten minutes to take a leisurely stroll from one end of the Mark Twain Riverfront Park in Elmira to the other, but there is a lot of history in the six-acre green space. The passive park is a strip of green running from Main Street to Lake Street between Water Street and the Chemung River.

Construction of the park began in 1975 as part of the “New Elmira” plan following the devastating Flood of 1972. At the time of the flood, Water Street was lined with three- and four-story buildings. While some argued that taking down the buildings would rob the city of businesses, the buildings were in poor condition before the flood and further damage made it impractical to repair them.

By 1975, the buildings along Water Street had been demolished, making way for the new park. Construction of the park was made possible by more than $800,000 in funding from a federal Open Space grant. The name Mark Twain Riverfront Park was proposed by the newly-formed Mark Twain Society in Elmira to help perpetuate the memory of the author in the community. The park was officially dedicated in June 1976 with more than 1,500 people in attendance.

Walking through the park today, you will come across features that span more than 150 years of history. Starting at the west end of the park at Main Street, let’s take a virtual walking tour of some of these features.

The Fountain
This fountain has been part of Mark Twain Riverfront Park from the very beginning. Today, it is drained each year for the winter, but back in 1976, the city kept it spouting into December with the hope of creating an ice sculpture after the column of water froze. (I never found a report that this actually happened, though.) Once temperatures dropped enough, they also hoped to freeze over the pond so people could ice skate on it. 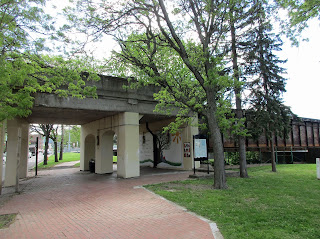 Next we come to the Erie Viaduct. While this is not technically one of the park’s features, it does run through it. The builders of the park in the 1970s had to work around this significant structure that was opened in 1934. The $3.2 million project eliminated at grade railroad lines that had cut the city in half. 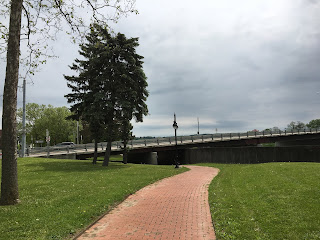 The next structure we come to on our tour is the Clemens Center Parkway. Just three years after the park opened, the new north-south arterial, another piece of the “New Elmira” plan, cut it nearly in half. In 1979, the entire length of Phase 1 of the arterial, from Pennsylvania Avenue to East Washington Avenue opened to traffic. The name Clemens Center Parkway was chosen because the Clemens Center was one of the most successful projects of “New Elmira,” attracting thousands of people from near and far into downtown. 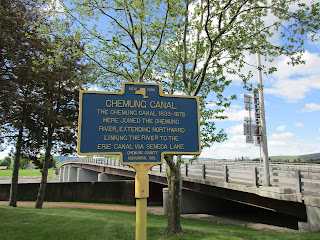 Just on the east side of the Clemens Center Parkway, we find a historic marker for the Chemung Canal. The canal opened in 1833, running from Seneca Lake to the Chemung River, and this was where it connected to the river. In 1878 the canal was abandoned in favor of railroads, which were cheaper, faster, and offered year-round service.


Sailplane Sculpture
Next on our tour, is the sailplane sculpture. The 23-foot tall sculpture of a pair of rotating sailplanes was designed by Ernest Schweizer, retired president of Schweizer Aircraft Corp., to honor Elmira as the Soaring Capital of the World. It was financed by the Elmira Rotary Club in commemoration of the club’s 75th anniversary. They unveiled the new addition to the park on July 4, 1980 and set it into motion. 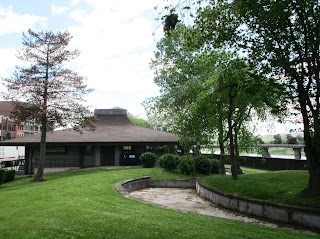 As we continue our virtual walk through the park, we come upon the Citizens & Northern Bank. The building was constructed in 1976 on a plot of land acquired through the Department of Housing and Urban Development, not as part of the Open Space grant that funded the rest of the park because that grant specifically prohibited commercial development. Shepard’s Sirloin Room, run by Morris W. Shepard Jr., opened for business in early 1977 and operated for thirteen years. In 1991, DeFilippo Brothers, Attorneys at Law, moved into the building. When the firm relocated in 2017, Citizens & Northern Bank purchased the building and opened a loan production office there. 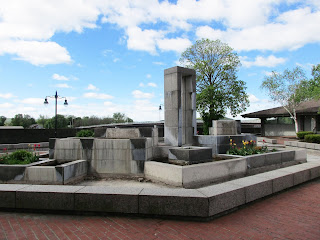 After walking past the bank, we come upon one of the most recognized and most troublesome features of Mark Twain Riverfront Park, the Citizens Cascade Fountain. The sculptural, 35-foot-tall, multi-tiered fountain made of cut granite was dedicated on August 9, 1977 with a crowd of about 100 in attendance. A plaque near the fountain reads: Citizens Cascade. Created to honor the people of Elmira for their spirit and determination to restore and beautify the Queen City after the devastating flood of June 23, 1972. “This is our home town and nothing under God will take it from us.”

The fountain turned out to be the source of constant headaches for the city. The water from the well that was drilled to supply it contained a lot of minerals that clogged the fountain’s pipes and pump within the first year of operation. In 1979, the city had to buy a water softener to keep it running, but it still needed regular repair. Finally, in 2003, the city decided to supply the fountain with municipal instead of well water.


Russell F. Gee Jr. Plaque
As we wind our way toward the end of our virtual walking tour, we come upon three flagpoles set facing Water Street. Just behind the flagpoles is a small unassuming stone with a brass plaque in honor of Russel F. Gee. Jr., who was a World War II bomber pilot, Elmira City councilman, “Wiz Kid” of downtown development, and president of the Elmira Savings Bank. Gee died suddenly of a heart attack in May 1967 at the age of 48. In November of that year, a newly-constructed mini-park just west of Lake Street was officially named after him.

In 1975, as plans were being made for the creation of Mark Twain Riverfront Park, the Elmira City Council changed a resolution calling for the new park to stretch the entire length of Water Street from Main Street to Lake Street in order to preserve this mini-park. So, this virtual walking tour has, in fact, been through two parks.

Posted by Chemung County Historical Society at 5:34 AM