[HistoryForge is a digital mapping and transcription project that has partnered with the Chemung County Historical Society to create Elmira HistoryForge. The digital history project combines historic maps and photos with census records of the people who lived in Elmira, creating a way to visualize the history of Elmira in the early 1900s.  HistoryForge is made possible by generous support from the National Historical Publications and Records Commission.]

Elmira HistoryForge is off to a running start after our first weekend! We have 363 records down and 36,813 to go in the 1910 census. Thank you to all of our new volunteers! Check out all of their hard work at www.elmira.historyforge.net. They have been transcribing Elmira's first ward downtown near Railroad Avenue and heading west toward Davis Street. By selecting The Forge, you can see these records populated in their homes on the 1903 Sanborn map. Transcribing census records is volunteer work that you can do from the comfort of your own home, on your own schedule. The only thing you will need is a computer and an internet connection. Come join us in our goal to preserve the stories of past Elmirans. You will be amazed at the interesting people you will find. For more information, contact me at historyforge@chemungvalleymuseum.org.

To kick off Women's History month one of our volunteers, Missy Rozengota, is sharing an amazing woman she found in the 1910 census; Mrs. Anna Campbell Palmer.


Anna Campbell Palmer was a lifelong Elmiran and a renowned writer who began her career at age 10 after publishing a poem in the Ithaca Journal. At just 14, Anna was orphaned; undaunted by such a tragedy she became a teacher at age 16. She was a beloved teacher at School #2 (Arthur W. Booth school) on Davis street where she worked for the next ten years.  After marrying George Archibald Palmer she gave up her career as a teacher and focused on her family and her writing.


She wrote articles for The Evening Star, The Telegram Advertiser and The NY Globe.  Her career advanced her to the position of editor of several local papers, and in 1889 she became the only woman editor to a young man's journal in the world when she worked for the YMCA's "Young Men's Journal". 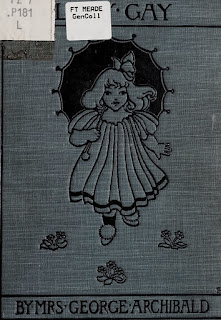 Anna was also well known for her Young Adult books. She might have been better known to some of her readers as Mrs. George Archibald, her husband's given name which she took as her pen name. The Lady Gay books, A Little Brown Seed, and A Dozen Good Times are some of her most cherished books for children. Along with books for children Anna wrote a biography of her beloved teacher Joel Dorman Steele in 1900.  She even began her own history of the Chemung Valley, but was forced to hand the task over as her eyesight failed in later years.


In 1910 we find Anna living at 363 College Ave (building is no longer there) with her family; her husband George and her daughters George Anna (Georgianna) and Sally. Sharing her home we also see her Mother-in-law Sally Palmer and 73 year old border name Martha Nicks.


Her daughters' talents came in the form of music; Georgianna being a piano teacher and Sally a vocal teacher. If the name Georgianna Palmer rings a bell you may be recalling her from CCHS’s exhibit, The Band Played On https://cchsonlineexhibits.wixsite.com/music/teachers. Following in her mother’s footsteps Georgianna became a teacher, and is listed as one of 58 music teachers in our 1910 census. Georgianna’s career spanned over 70 years, beginning at the young age of 15. She honored the city of Elmira by sharing her musical talents, and they honored her with a scholarship in her name; The Georgianna Palmer Music Scholarship. At her passing in 1968, Georgianna, just like her mother, had lived a life to make her community proud.

I picture their home now as I drive down College Ave, not as the parking lot it is now, (a parking lot on the corner of College and Second St.), but a beautiful home full of music and literature. I cannot wait to see these amazing women again in the 1920 census!

Posted by Chemung County Historical Society at 4:30 AM