It’s hard to miss the billiard table on display in the Museum in the Bank Gallery’s Mark Twain section. It came from the third floor playroom of the Langdon home on Church and Main streets. When the home was demolished in the 1930s, the table was moved to the J. Langdon & Co. office on Baldwin Street. It was later sold to lawyer and businessman John Sullivan who had offices on East Church Street and, later, Baldwin Street. When Sullivan died in 1965, Sullivan’s cousin and law partner, William Delaney, inherited the property along with its contents and donated the table to the Historical Society.

The connection with the Langdon family is one reason it's placed in the Mark Twain exhibit, since Samuel Clemens, who often went by the pen name Mark Twain, was Jervis Langdon's son-in-law. Sam's passion for the game of billiards is another. 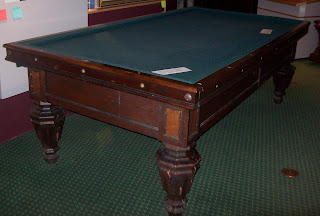 His daughter Susy wrote that “Papa’s favorite game is billiards, and when he is tired and wishes to rest himself he stays up all night and plays billiards, it seems to rest his head.”  The family home in Connecticut even had a distinctive room used just for billiards.

If you look closely, the table in the Connecticut home has corner and side pockets. Games played on this table would be slightly different than those played on the museum's table, which has no pockets.

Billiard games peaked in popularity in the mid-19th century. Billiards is a general term for games played on a billiard table, with or without pockets. There are two main categories of billiard games: those played on tables without pockets, and those, called pool, played on tables with pockets. Both categories have a common origin in a popular lawn game from the 15th century, somewhat like lawn croquet. The word “billiards” is connected to the French word “bille” meaning ball while the word “pool” means a collective bet, as in pooling bets. From early on billiard games have appealed to and been played by people from all social classes.

When the game moved indoors, the playing surface required walls called banks, like the river, to prevent the balls from escaping. Players initially shoved the balls around using a mace. Like the weapons, a mace has a large head on one end of a long pole. Its pole or handle is called a tail, or “queue.” However if a ball landed near a side wall, players found they needed to turn the stick around to shove the balls with the queue because the mace’s head wouldn’t fit. What we now know as cue sticks seemed to have developed in the late 1600s and players soon discovered using a bit of chalk on one end of the cue stick increased friction, and was advantageous. Early on women were not allowed to use the cue end of the mace, as it was thought women weren’t capable of skillful moves and would just rip the table surfaces. At the turn of the 18th century, leather tips were added to cues. This now allowed players to apply side-spin, topspin, and backspin to the ball in play. The two-piece cue stick came on the scene in 1829, and table surfaces changed from wood to slate to prevent warping. By 1845, tables sported rubber billiard cushions.

The goal of any billiard game is to make a carom shot. This is a shot where the object ball or cue ball hits another ball to move or pocket it. Scoring depends on the game being played, and there were many versions developed. American Four-Ball was the most popular game played until the 1870s when Straight Rail and American Fifteen-Ball Pool then surpassed it. The Nine-Ball was developed in the 1920s.

The game was so popular during the 19th century that championship tournaments were held yearly, even during the Civil War, and celebrated players would earn their likenesses on trading cards.

Billiard tables were often located in hotels and bars. In Elmira City directories from the 19th century, suppliers of billiard equipment are listed, but no independent billiard businesses. One local site of tournaments was located on East Gray Street. There the Father Matthew Society, a Catholic society built on the idea of total abstinence, erected a clubhouse in 1898. It had a room dedicated to billiards on the second floor and held a yearly tournament.

In 1907, Elmira passed an ordinance to require a license fee or tax on billiard tables in halls or saloons and prohibited play between the hours of 1 am and 7 am and all day Sunday.

Billiards became less popular after World War I when returning troops didn’t have time to spend entire afternoons hanging out around a pool table. 2020 has been such a strange year, seeing some pastimes like puzzles rediscovered. I wonder what iconic object from the 2020s will be on display in the future.

To see an example of play on a billiards table, here's a link .