When I was researching my last post here about theMcCann Boulder, I came across an article in the Star-Gazette from 1922 presenting the monument as part of a series of articles entitled “Interesting Historical Points Around City Told In Pictures.” From February 14 through March 2, the newspaper highlighted 13 different points – seven historic buildings and six monuments. The buildings featured were the first post office, the home of Thomas Maxwell, Elmira’s first academy, the Young Americans’ Hose House, the Civil War prison camp morgue, the Park Hotel, and John Hendy’s cabin. Unfortunately, those buildings no longer exist, but all six monuments can still be seen today. 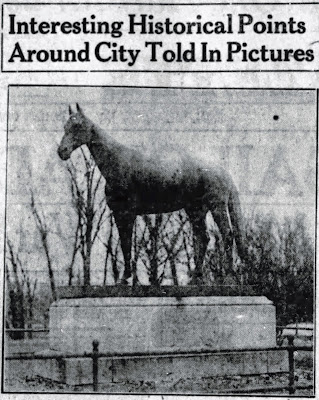 The above statue is American Girl, a famous trotting horse which held many records during Elmira’s early days some fifty years ago. This memorial was erected in Eldridge Park, facing the site of the track where she captured so many triumphs.
American Girl was owned by William Lovell of New Yor. [sic] The beautiful animal was foaled in 1862 and had 150 heats to her credit. Her record time is 2:16 ½. All her races were in 2:30 or less.
American Girl dropped dead in a free-for-all race staged October 2, 1875, when thousands of racing fans from throughout the East journeyed to see this fastest of all horses race.

American Girl stood in Eldridge park until October 7, 1980, when vandals used a vehicle to pull the statue off its pedestal and broke it into 147 pieces. In 2016, after being skillfully repaired and restored by Tom Beatty, the statue was finally returned to the park. It now stands in its own custom building on the northeast side of the lake next to the miniature golf course. 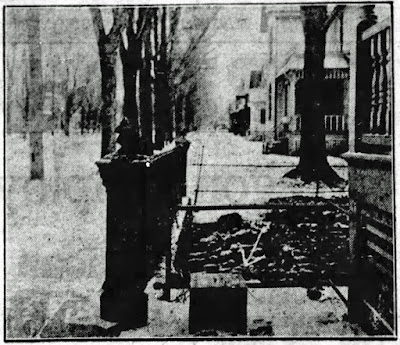 Here is all that remains of the once famous United States Confederate prison camp in 1861 in operation during the Civil War. The marker is a few feet east of Hoffman street. The camp extended west about one half mile from the marker, which is noted by arrow in the above picture. The marker is on the river side of Water street near Hoffman Creek It was erected by the Baldwin Post, No. 6, G.A.R., in 1900. Doubtless there are many patriotic Elmirans who did not know that the marker exists.

You can read about the history of the prison camp by clicking here. The stone marker is still in the same place just east of Hoffman Street. There are hedges growing around the monument but they have been trimmed so that it is visible. Just a block south of Water Street on Winsor Avenue, the Friends of the Elmira Civil War Prison Camp have reconstructed some of the site and welcome visitors on Saturdays throughout the summer. You can find more information on their website: www.elmiraprisoncamp.com. 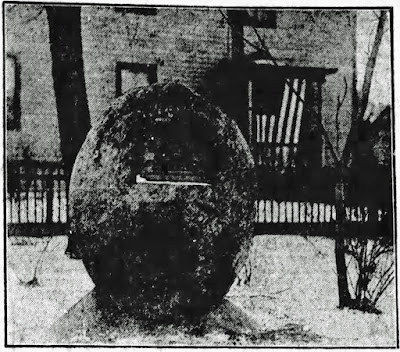 Elmira has the distinction of being represented in the discovery of the North Pole by Admiral Robert E. Peary. The above memorial to Ross Gilmore Marvin is located at the intersection of Lake and Union place. It was erected by Elmirans in memory of Mr. Marvin who was born on January 28, 1880. He was lost in the Arctic ocean on April 10, 1909, while a member of the Peary Expedition, which discovered the North Pole. Mr. Marvin was a student, teacher and explorer. Mr. Marvin was the son of Mary Marvin, 700 Riverside avenue.

To read more about Ross Marvin, and learn details about his possible murder, click here. Marvin’s memorial is no longer at the intersection of Lake Street and Union Place, though that location was designated as Ross Marvin Park by the Elmira Lions Club in 1957. The monument was moved several times over the years and today rests at the southeast corner of Church and Lake Streets. 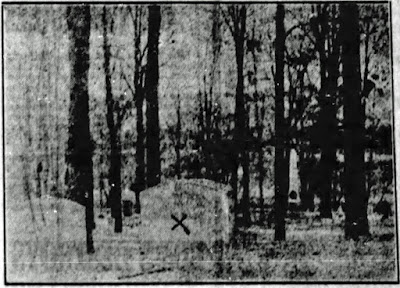 This simple headstone marks the spot in Woodlawn cemetery where rest the remains of Samuel L. Clemens (Mark Twain), famous American humorist and author, who made is home in the city during his younger days. Mrs. Clemens was one of Elmira’s fairest daughters, Olivia Langdon Clemens. Ostentation had no place in the life of Mr. Clemens, except as a target for many a pinioned shaft of keenest wit – and in death a simple stone bears the name that needs no costly mausoleum to add to its luster.

The Clemens and Langdon families’ gravesite in Woodlawn remained rather modest until 1937 when Sam and Livy’s daughter Clara Clemens Gabrilowitsch had a large stele with bronze portraits of her father and her husband installed. Woodlawn Cemetery has made it easy to visit Samuel Clemens’ final resting place. Enter the cemetery through the Walnut Street gate and follow the signs to Mark Twain. 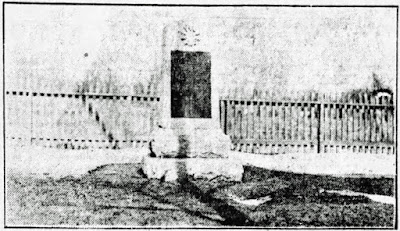 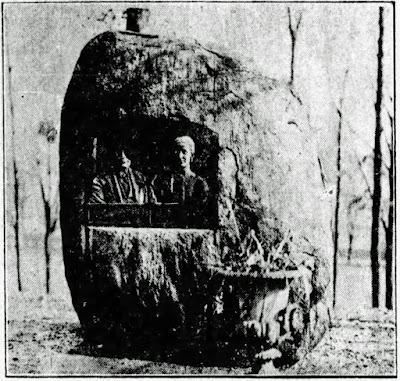 The huge rock near the Davis street side of Woodlawn cemetery marks the final resting place of George and Crete McCann, early settlers of Elmira. The boulder was hauled from the east side of the canal over a specially built bridge. Several teams of oxen were used to draw it to its present position. Mr. McCann was the uncle of Supreme Court Justice George McCann. He was an active Elmiran and in the city’s early history Mr. McCann’s name appears prominently.

To read more about George and Crete McCann, and their monument, click here. While visiting Samuel Clemens and family in Woodlawn Cemetery, it is very easy to find the McCann monument just down the hill.

If you would like to read the full series of articles from 1922, including those about the historic buildings, click here.