Clothes Make the Man (or Woman)

Two years ago COVID-19 arrived, and since then we’ve all learned to live with a variety of changes. One of those changes that continues to evolve is how we present ourselves at work. With more meetings happening remotely, some office workers are opting for a more casual look on the job but keep “zoom shirts” or jackets handy to appear more presentable online. 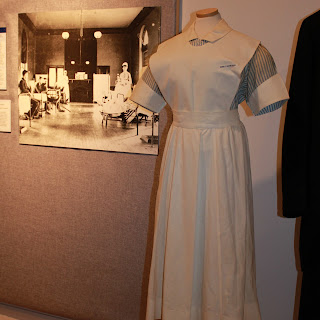 In the past, people in the medical field, transportation, and business professions were expected to wear specific types of clothing to reflect their position, indicate their responsibilities and communicate their status and class. Think of them as work uniforms.

Our current exhibit All in a Day’s Work: Dressed for Success shares examples of how, over the years, different Chemung County professionals have dressed for work.

Three uniforms on display in our exhibit reflect some ongoing changes in our societal expectations for work attire.

A woman’s nursing uniform, like other uniforms in the medical profession, is designed to inspire patients’ confidence and trust. Being attended by someone wearing a dirty uniform is almost hard to imagine, and the importance of wearing a uniform in nursing can be traced back to Florence Nightingale. When Nightingale established the world’s first secular nursing school in 1860, she dressed her nurses in gray uniforms. The outfits helped identify nurses who had training, and the gray didn’t show the color or blood when wet. The uniform was also meant to neutralize the wearer’s appearance and deter unwelcome advances from patients under their care, who were commonly young male soldiers far from home.

At the beginning of the 20th century, nurses shifted to wearing white. There were strict protocols and expectations for them to keep their uniforms starched and pristine. Wearing white was “proof” that nurses were clean, sanitary, and offered scientific care. Mid-century nurses wore starched white dresses, white caps, white nylons and white shoes, similar to the example on display from St. Joseph’s Hospital. Often nurses were required to care for their own uniforms which meant time-consuming work to remove from bodily fluids.

When women’s fashion became less restrictive, the style of nursing uniforms followed along. By the 1970s and 80s, nurses began to wear scrubs, and today scrubs are the primary outfit of choice for the profession which includes more male nurses. Scrubs allow the wearer more freedom to move, often come with pockets to carry tools, and can be worn by any gender. Scrubs come in a variety of bright colors and patterns which allows nurses to personalize their look, if their affiliated institution permits it. 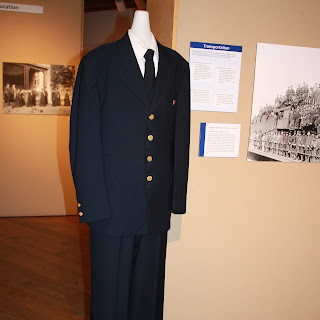 Uniforms have also been part of transportation work. Each style of dress indicated what position workers held and informed the public what to expect. Early train and trolley conductors, airline pilots, and bus drivers wore matching uniforms that had a distinct military style. This inspired confidence in their skills and abilities, and helped to make them look competent. The Lackawanna Railroad conductor's uniform from 1954 is a good example of that style. It comes with fancy brass buttons that include the Lackawanna R.R. logo to indicate the wearer was someone of note. Today transportation uniforms vary. Airline pilots still wear military influenced uniforms, often with brimmed hats and epaulets on the shoulder. Bus drivers are more casual and if they wear hats, tend to favor ball cap styles. 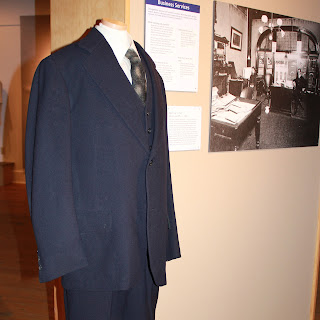 Unofficial uniforms have been worn by office workers providing business services since the beginning. In the 1930s, American writer Upton Sinclair called professionals who receive salaries “white collar workers,” referring to the white shirts and business suits many workers wore. The term stuck and is still used today. “Business casual,” or business attire was expected in many professions as a way to command respect from peers and customers, as well as show respect to those they worked with. Male workers who dressed this way communicated an unwritten message of who was in charge, and what position someone aspired to.

For women entering the workforce during the last century, fashion trends shifted from ultra-feminine to more traditionally masculine. Early on, it was unthinkable for women in offices to show up without wearing stockings, heels, skirts or dresses. Women began to wear suits similar to their male colleagues, adding shoulder pads to convey power and authority. The office worker’s outfit we have on display is a man’s suit from 1930, when white-collar workers were expected to wear suits, hats, and dress shoes to the office every day.

Today, advice for anyone interviewing for a job is often to dress for the job level above the one they’re applying for. What we choose to wear is a kind of language. We represent the organizations we work for as well as representing ourselves, and our clothes can say something about us.

Whether or not the more casual styles adopted during the pandemic stay with us, we’ll just have to see.

Posted by Chemung County Historical Society at 3:00 AM