By Guest Blogger Melissa Rozengota, a volunteer with Elmira HistoryForge, a project sponsored by the Chemung County Historical Society

You meet some of the most interesting people transcribing historical census records. I first encountered Miss Esther Hart in the 1910 census during my work as a volunteer with Elmira HistoryForge (https://elmira.historyforge.net/), a project which combines historic maps with census records and photographs to create a unique way to visualize community history.  At first glance, Esther Hart seemed a largely unremarkable individual; she was single, white, female, age 40.  She is listed at 302 E Church Street with her widowed older sister Fannie, niece Francis, nephew Pierson and 80-year-old father, Dr. Ira F Hart at 302 E Church Street. The detail that caught our attention was that she was a clerk in Washington D.C., while living in Elmira.

Esther was born February 22, 1862 in Elmira, New York to Dr. Ira Hart and Marion E. Cook Hart, early settlers in the Elmira area. Esther attended Elmira College and graduated with a Bachelors of Arts in 1883. She also later attended The Cooper Institute in New York City and completed a 4-year course in wood engraving and art. It was here that she met fellow student, Mrs. Anna Botsford Comstock, the first woman Professor at Cornell University and an acclaimed author, illustrator, and educator of natural studies. The Elmira city directories list Esther as a wood engraver and teacher from 1887 through 1905. By 1906, she attained her job in D.C. 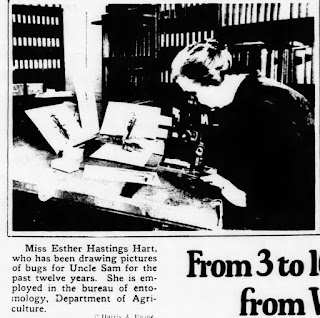 Esther began her work in D.C. in the Patent Office as a draftsman, transferring from there in 1907 to the Forest Service Dept. It is within this department where her drawings caught the attention of Dr. A.D. Hopkins. Impressed with her natural aptitude, Dr. Hopkins secured a transfer reassigning Esther to the Bureau of Entomology for the Delineation of Forest Insects in 1911. In 1917, when Dr Hopkins retired, she transferred to the Division of Cereal & Forest Insect Investigation where, for 15 more years, she illustrated many publications. Some of Esther’s illustrations are still in use to this day and can be found in Dr. Craighead’s Monograph of The North American Cerambycid Larvae and The Southwestern Corn Borer. 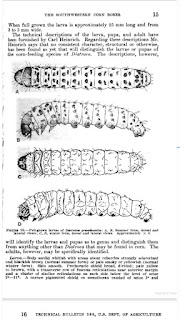 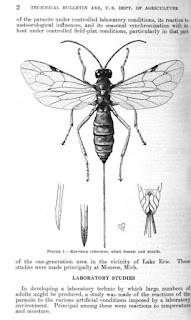 Esther’s ambitions were not relegated to her career. She was involved in many activities and groups that brought her into the influential circles of our nation’s capital. In 1906, Esther was a guest of President & Mrs. Roosevelt’s in honor of the Army & Navy in the Blue Room at the White House. 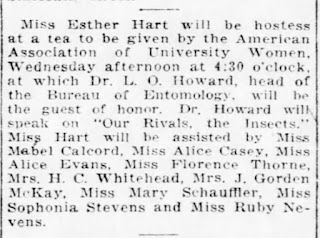 In 1925, Esther was the hostess of a tea given by the American Association of University Women where she displayed her drawings.

When Esther was a charter member of the Elmira College Club in 1932, she met First Lady Mrs. Herbert Hoover for a ceremonial tree planting. The ceremony was in memory of President George Washington and Esther had her photo taken with the First Lady. 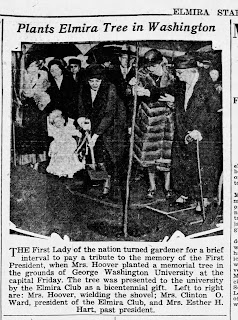 Ironically, we at Elmira HistoryForge should never have “met” her transcribing the 1910 Elmira census because she didn’t truly live here. Esther was listed on two 1910 Census. Not only was she listed in the Elmira census, but the Washington D.C. one as well.

The D.C. Census listed her, inaccurately, as age 41, born in 1869. She was living with Clara S. Davenport, a government stenographer, age 32, born in 1878). I believe Clara was an acquaintance Esther knew from Elmira or maybe from College. The Elmira Census was taken April 21st & 22nd and the D.C. census was taken April 23rd. It is most likely the Elmira census taker didn’t realize that Esther was just a visitor in Elmira.

Esther was respected and esteemed for her work. According to her obituary from August 3, 1940, she was “a woman of kindly, refined, lovely character.” Despite living away for so long, she had strong ties with her family and Elmira and is buried in her family plot in Elmira's Woodlawn Cemetery.

We hope Miss Esther Hart would think the nickname we gave her is endearing and that she’d be delighted that 82 years after she passed away we found her everyday life in the early part of the 19th century so interesting. 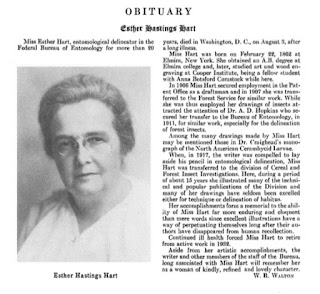 As a woman in the early part of the 19th century she had many opportunities in her education and work and left a name for herself.

(To get involved with this cool project, contact our HistoryForge Coordinator at HistoryForge@ChemungValleyMuseum.org for more details!)