Our Town, Our Teams: Hockey in Elmira

Hockey in Elmira has a storied history to it that most people wouldn’t really think about. From going to the domes in Pine Valley to watch the Elmira College teams play to weekend nights down at First Arena cheering on the professionals, there have been some memorable times for the sport in our neck of the woods.

Elmira College introduced the sport to its athletic program starting in the 1973-1974 season, and it was a very successful program in those early days. In six of their first 16 seasons, they made NCAA Tournament appearances and reached the finals twice, which is no small feat for any college program. In the entire history of the men’s ice hockey program, however, they have never been crowned National Champions despite having multiple years of success. In the 2001-2002 season, the women’s ice hockey program came into existence, and they started their history by winning back-to-back NCAA Division III National Championships in the first two years of the program. They have only missed the NCAA Tournament in 3 out of their 21 years, and they have been one of the most dominant powerhouses in Division III throughout their entire history. 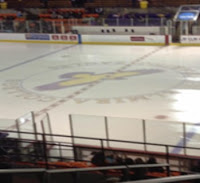 Professional hockey officially came to Elmira in 2000, when the United Hockey League (UHL) awarded a franchise to the city that would be known as the Elmira Jackals. The brand new First Arena, then known as Coach USA Center, had just been completed with the Jackals beginning play in the 2000-2001 season. After an early exit in that year’s playoffs, the Jackals earned a spot in the Colonial Cup Finals in two of the next four seasons, losing both times. Eddy Lowe was a leading player on most of those playoff teams, and eventually got his number 26 retired by the Jackals in 2007, an honor that has not been given to any other professional player for any Elmira team. For their final few years in the UHL, the Jackals missed the playoffs, and never reached a championship series again.

The UHL began to struggle in the mid-2000s, and in April of 2007 the Jackals joined the ECHL, which is the league two levels down from the National Hockey League and is the NHL’s Double-A affiliate league. The Jackals enjoyed some early success in the ECHL, making the playoffs for their first six years in the league while serving as the primary AA affiliate of teams like the Columbus Blue Jackets, Anaheim Ducks, and Ottawa Senators of the NHL. There was a lot of instability, however, due to ownership changes and financial struggles for the team come 2013. In 2014, things seemed to be looking up when the Jackals became the ECHL affiliate of the Buffalo Sabres of the NHL, but those good vibes did not last long as most of Elmira’s talent didn’t really stick around long enough to create a solid team that could compete for a championship, let alone a playoff spot at all. Come 2017, they were owned by the Chemung County Industrial Development Agency (IDA), and as a result of low attendance and arena issues the Jackals folded after playing their final game on April 8th, 2017. 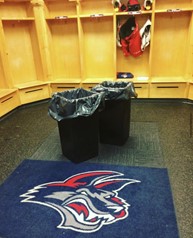 First Arena was pretty much closed throughout the 2017-2018 hockey season, with the exception of the youth hockey programs playing on the recreational rink. In the summer of 2018, it was announced that a new team would come in and play in a league called the Federal Prospects Hockey League, which is a level below the ECHL. The team, owned by Elmira Pioneers baseball team owner Robbie Nichols, became known as the Elmira Enforcers out of tribute to law enforcement. The 2018-2019 season was very good for the new team, but they failed to capture the league championship as they lost in the finals that year. 2019-2020 seemed to be going decently for the Enforcers until the COVID-19 Pandemic hit the United States, causing all sports leagues to shut down and ending the Enforcers’ quest for redemption. The following season was shortened because of the pandemic, and the Enforcers once again did not get the job done as they did not win the title. After the 2020-2021 season, it was announced that the Enforcers would not play in the upcoming season due to Nichols and the Chemung County IDA failing to come to an agreement on a new lease for the arena. The Elmira Enforcers effectively ceased to exist.

Once again, the future of hockey in Elmira was in a cloud of uncertainty. With an arena that had not been properly maintained and with a lack of consistent management, it looked as if professional hockey was done here. However, the arena was leased out and taken over by Steve Donner. It re-opened in December of 2021 under his management for public skating and recreational hockey and it was announced in April of this year that a new FPHL team, the Elmira Mammoth, will be beginning play this coming fall.

Elmira’s hockey history has had many great moments as well as moments that were not so great, and it’s very interesting to look at how much hockey has impacted Chemung County as a whole. It has given the community a lot of exciting memories from the thrilling fights and goals to simply being able to take the family out to the hockey game on a Friday or Saturday night. It’ll be very interesting to see what the future holds for the sport in Elmira.