Two eight-year-olds were recently touring the museum looking at the exhibit When Waters Recede: 50 Years since the Flood of 1972. One was overheard to ask the other, "Were you alive during the flood?” to which the other responded “NOBODY was alive during the flood.” Of course, this was humbling to those of us that were alive fifty years ago.

What is history? History is anything that has happened and history museums like ours house collections to tell the stories. Artifacts in our collections could be from as recent as yesterday, from fifty years ago, or much longer - as in the case of our wooly mammoth tusk.

The flood fifty years ago was a traumatic event that made huge changes in our area. Less obvious are some of the changes we’ve experienced since then. As part of our exhibit, we’ve put out a rotary phone, adding machine, and manual typewriter so visitors can experience what some technology was like back then.

The visiting elementary students recognized the purpose of the objects, but how to use them was not so clear. Faced with making a phone call, many of our young visitors were full of giggles. They noticed that compared to cell phones, a rotary phone has two parts the handset and the body of the phone to which it’s connected, called the dialer. They noticed it took much longer to dial a number. They noticed it was heavier, and many weren’t sure about where or how to hold the handset. They noticed phones were connected to the wall and they just wouldn’t fit in our pockets.

Adults who remember rotary phones also remember the party lines, and tripping over long cords - cords that were essential to ensure a private conversation. While this phone looked different to the students, they understood it was a phone.

In 1892, the first patent for rotary phones was filed. In 1919, the American Bell Telephone Company had started national service for what they called user-controlled rotary dial phones. These look closer to what we have on display  commonly found in most households by the 1950s. The 1970s was the decade things transitioned to touch-tone buttons. Anyone remember sounding out tunes on the buttons? By the 1980s, most people had push-button phone dials.

The typewriter on display was more recognizable to the students. Its keyboard resembled computer keyboards they are familiar with. However, actually typing on this machine was a different experience for them. Manual typewriters are stiff and the action of the keys take more finger strength to engage. Computer keyboards tend to be much easier to press so it took time for students to get used to pushing the keys hard enough to strike the paper. They had no idea what to do when they typed to the end of the line. Having to manually move the carriage to start a new line was confusing.

Different versions of typewriters can be traced back to the 1700s. In the United States, the first commercial patent for a typewriter was issued in 1868, but different versions of typewriters had already been around for over one hundred years. The oldest typewriter in our collection is the No. 7 Franklin, pictured here, with a patent date of 12/09/1891. And frankly to me, it’s not clear how I should place my hands on the keyboard. 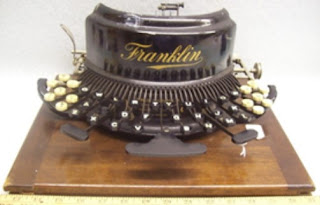 Many of us might recognize what it is, but how to use it is less obvious. This older artifact is not currently on display, but if you haven’t seen our exhibit yet, we invite you to drop by the museum and try your hand at typing, or bring back memories by picking up the phone’s handset and dialing your number. A lot has changed in fifty years.
Posted by Chemung County Historical Society at 9:00 PM

Email ThisBlogThis!Share to TwitterShare to FacebookShare to Pinterest
Labels: In the Museum, technology, telephones, Typewriters