Fascination, Salvation, Damnation, and Procrastination: The Infamous Corners of Lake and Church 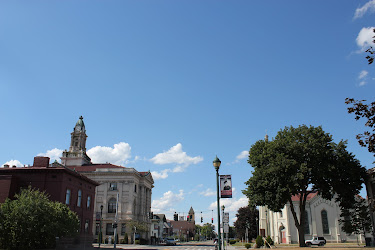 While leading one of our Historic Downtown Walking Tours last month, I learned some fascinating history from our knowledgeable trolley-master Mark Delgrosso. Mark brought to my attention that the four buildings that existed on the corners of the intersection of Lake and Church streets at the end of the nineteenth century bore very interesting nicknames which tell us a little about their histories.

No longer standing, the opulent Reynolds Mansion once graced the intersection where the Carnegie (Steele) Library later stood, and where a monument to adventurer Ross Marvin stands today (the southeast corner). This home was occupied by the family of Dr. Edwin Eldridge’s daughter Julia. Julia Eldridge married Lewis Stancliff in 1856. But Lewis died young in 1864, and Julia remarried, this time to Samuel “Tutt” Reynolds. Julia’s father built her the magnificent Victorian Mansion on Lake and Church Streets in 1869 to celebrate this new chapter in her life. The mansion was splendid – boasting mahogany panels, stained-glass windows, and velvet carpeting—and was overflowing with priceless works of art. Passerby gazed with wonder at its outdoor fountain, beech tree, and three entrances; it became known by the nickname “Fascination”.

The City Club, designed by Rochester-based architects Crandall and Otis as a refined social club for wealthy citizens, moved to its current site on the corner of Lake and E. Church streets on New Year’s Day, 1894. The building housed a reading room, club rooms, billiards room, and a café. A separate ladies dining room existed, and a separate entrance for women was on the Church Street side of the building (women were not accepted as members of the club until 1986). Despite the fact that early members of the club included respected gentlemen such as Charles J. Langdon, George M. Diven, J. Sloat Fassett, and John H. Arnot, the club was known to be a site of drinking and, it was rumored, carousing. The roof-top garden added to the club in 1901 was closed only a decade later because of loud noise and rogue food and bottles being thrown into the street. The City Club thus earned the appellation “Damnation”. 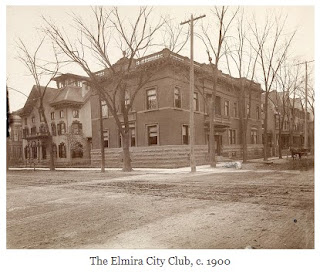 Finally, City Hall, elegantly designed in the Neo-Renaissance style by Joseph Pierce and Hiram Bickford in 1895, was termed “Procrastination”.  Pierce and Bickford’s fingerprints are found throughout Elmira’s historic district; the pair designed the Courthouse Complex and Hazlett Building as well as City Hall. The architects’ intended the structure to be a slow-burning building capable of resisting fire long enough to allow for safe evacuation. There was a fire on the upper floors in 1909, but the building lived up to its promise and the minimal damage was quickly repaired. Why would the citizens of Elmira associate city governance with procrastination in 1895? When it comes to government, it’s easy to say that any pace is perceived as too slow, but in the 1890s, city government was also rocked by corruption and scandal. Frank Bundy, who served as Assistant Chamberlain in 1892 and 1893, and then as Chamberlain from 1894 until 1900, “cooked” tax records for years before the City Council had cause to investigate. Chamberlain embezzled $84,495 in city funds (that’s close to $2.5 million today). He served four years in Auburn Penitentiary. 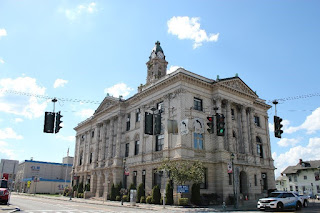 These four buildings earned their names sometime at the close of the nineteenth and the beginning of the twentieth century, when their individual characters appealed to the public imagination. It is a testament to both the creativity and diversity of the city of Elmira during this time that Fascination endured amidst Procrastination, and Salvation stood just across the street from Damnation.

Posted by Chemung County Historical Society at 7:00 AM