In 2020, when the whole world seemed to pause, the annual Elmira Downtown Holiday parade was canceled. Without a parade, CCHS shared 170 images from our collection for a virtual walk down memory lane. You can still see that album on our Facebook page. Eighteen of the images are from a Corning parade, and two are missing dates because we couldn’t confirm when the pictures were taken. Of the 150 remaining images, we thought you might enjoy seeing the top 5 ‘liked’ photos. In order of popularity, here they are. 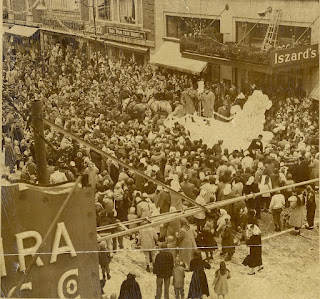 This image got the most attention. Since we posted photographs in chronological order, it was also the oldest confirmed photo in the album. It was taken in 1958, and shows a crowd of people surrounding a horse drawn sleigh in front of Iszard’s Department store. Best guess is it was the end of that year’s parade. On the sleigh, Santa is joined by two official-looking men wearing winter coats. Most of the crowd are wearing coats and hats and many women are wearing scarves on their heads. One observer commented he remembered watching Santa get off the train and climb down for the parade. Others remembered shopping on crowded streets. While a few remembered specific food they ate at Iszard’s. Cream cheese and olive sandwiches anyone?

Second in popularity was this crowd scene from 1966. Here the image includes mostly children intently watching something just out of the picture frame. A few children are waving. One observer recognized himself in the crowd. It must have been warmer that year, because fewer people are wearing hats and there are no winter boots in sight. 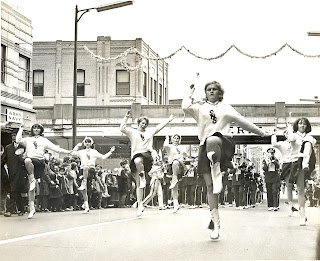 The third photograph was also taken in 1966. You can see a group of Southside High School baton twirlers high-stepping down the street followed closely by a marching band. Onlookers line the side of the street, and a partial view of the viaduct span can be seen. One observer recognized her mother performing with a baton. 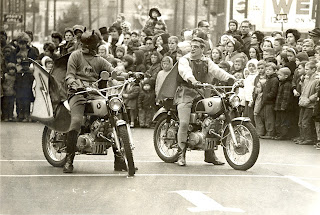 The fourth photograph was also from 1966. It shows two men dressed in Batman and Robin costumes astride motorcycles. They both look off to the side at something out of the photograph’s frame, and have their feet on the ground, indicating they are paused. A crowd of children and adults watch. While no one left any comments on this image, it clearly sparked nostalgia. 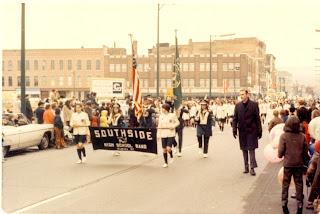 The fifth most popular photograph was taken in 1969. The image shows two young women carrying a banner for Southside’s High School Band which follows behind. Behind the banner are two processional flags. Both sides of the street are lined with onlookers. Commenters on this image recognized themselves or other band members.

Winter holidays often inspire us to look back at the past, whether fifty years ago, twenty-five years ago or the year about to pass. We hope you enjoy seeing these again. Whatever traditions you celebrate, we hope you share them with friends and family, and maybe a cream cheese and olive sandwich on the side.