The Golden Age of Roller Skating

I do not have fond memories of roller skating.  When I was a kid, it was cool to have your birthday party at Interskate 88 in Oneonta, NY, but I always found such parties rather torturous.  See, I never mastered skating.  You put wheels on my feet and I am totally incapable of mustering anything that even resembles coordination.  When I made it onto the rink, I clung the bar on the wall like my life depended on it (and given my pitiful skating skills, perhaps it did).  All I wanted to do was get to the cake part of the festivities!

But unlike me, many people both now and historically have enjoyed roller skating.  Roller skates first appeared in the 1700s, but didn’t become popular until the late 19th century when the skates could be mass produced and sold cheaply. 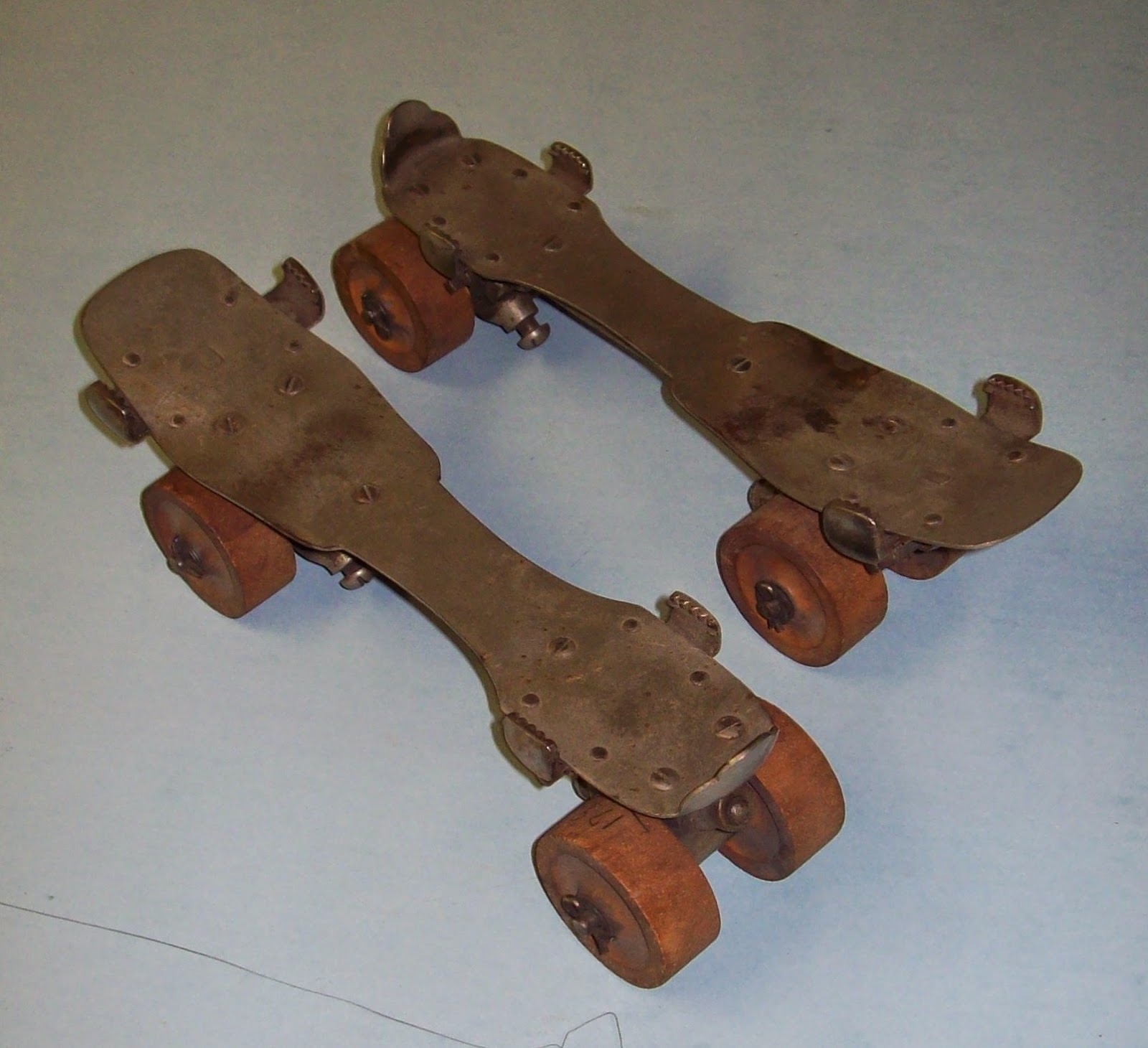 The roller craze swept America and Elmirans latched onto the fad.  Several roller rinks operated within city, including the Mascot, Union, and Star rinks.  The sport and rinks reached the peak of their popularity in the 1880s when there were four rinks open in the city.  3,000 people showed up to the grand opening of a rink in 1884.  The Mascot Rink on Madison Avenue, also constructed in 1884, was described as one of the largest wooden buildings ever built in the city.  Designed by Elmira architects, Pierce and Dockstader, the 85 x 212 foot building featured a 60 x 176 foot skating floor.
In addition to being able to skate themselves, people who went to local rinks also had the opportunity to see many shows.  Races were a common event at the early rinks.  Some local boys became well-known for their skating prowess as they defeated other young men from around the region. 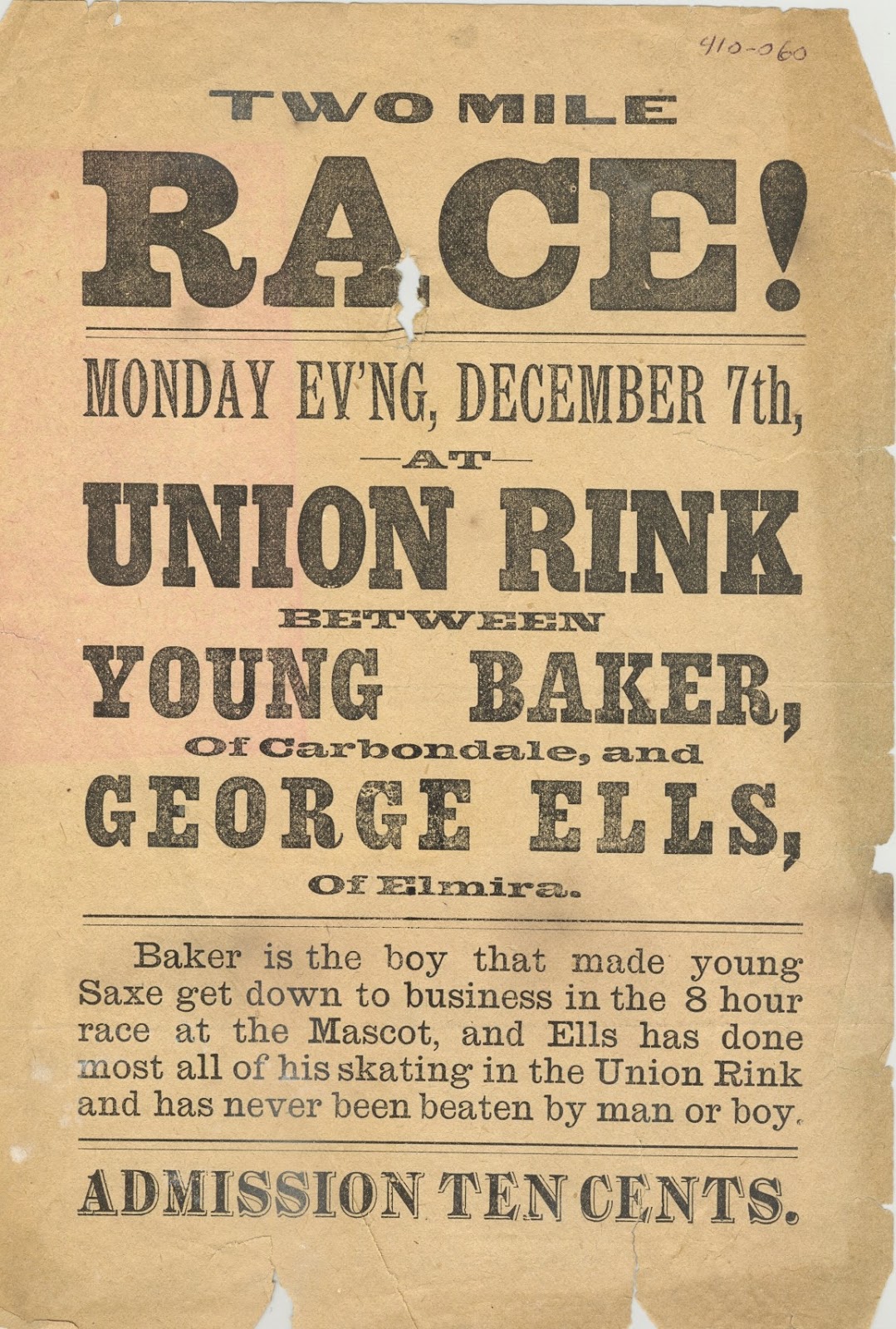 The rinks also offered more eclectic fair, like a greased pig race or musical performances.  Trick skaters were also very popular.  In May 1884, 250 braved bad weather to see a performance by the Decker family of New York City, an act that even included skating on stilts!  Some local men, including Joe Powell and Thomas Welsh (brother of the famouscontortionist and juggler William Welsh of DeHollis and Valora), became well-known acrobatic skaters who travelled the country.  Charles Beckwith of 112 Columbia Street was a skating daredevil known for his barrel jumping.

Skating, however, like all fads, quickly began to fall out of fashion.  Around the turn of the 20th century, some of the rinks were converted into theaters and other were out of business.  While many people still enjoyed skating, there was no longer the demand for the sport there was in prior decades.  There were periodic revivals and a new rink opened in 1914.  Skating remained popular with children who raced down the streets on their skates, which created a serious safety issue.  On the city’s west side in 1924, concerned citizens even roped off an entire block to ensure children’s safety while skating, although residents on Elm Street protested the decision.
In the ensuing decades, roller skating has remained a popular hobby in the city, but has never again reached the “golden age” status it held in the late 1800s.
Posted by Chemung County Historical Society at 3:38 PM