By the time of the 1916 presidential campaign, the average American had no interest in getting involved in the bloody quagmire which was World War I. In fact, Woodrow Wilson won his reelection bid on the slogan “He kept us out of the war.” It therefore came as an unpleasant surprise to many when America declared war on April 6, 1917, just a month after Wilson’s second inauguration. He would need to get America invested in the war and fast if the country was to have any hope of winning. Enter the Committee on Public Information. 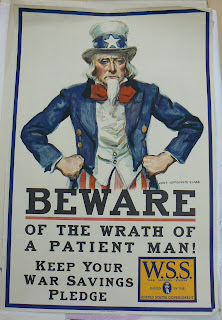 Established by Executive Order 2594 on April 14, 1917, the Committee, chaired by muckraking journalist George Creel, consisted of Secretary of State Robert Lansing, Secretary of War Newton D. Baker, and Secretary of the Navy, Josephus Daniels. Their mission was to launch a comprehensive PR campaign across all media platform in order to win the hearts and minds of the populace. The Committee had over twenty different divisions and bureaus, each focusing on different ways to get their message out. There was a Film Division which worked with Hollywood to make pro-war films, a Division of Syndicated Features which produced short stories and op-ed pieces for literary magazines, a News Division which issued daily press releases to newspapers, and so on. 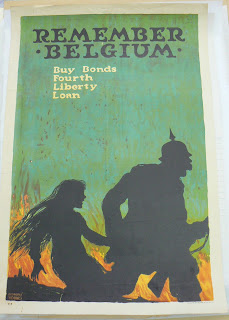 The Division of Pictorial Publicity was in charge of making posters and other advertisements. It was headed up by Charles Dana Gibson, one of the more prominent commercial artists of the day and president of the Society of Illustrators.  Thanks to his pull within the artistic community and publishing industry, Gibson was able to get hundreds of prominent artists to produce posters and other advertisements for free. In addition to big name American artists, he also recruited foreign artists from allied and occupied nations. All told, the Division of Pictorial Publicity produced over 14,000 posters promoting military recruitment, war bonds, the Red Cross, war gardens, the U.S. Food Administration, and nearly a dozen other war-related causes. The posters were displayed on billboards and in schools, shops, factories, and just about everywhere really. As ubiquitous as the posters were, it was neigh impossible to read a magazine or newspaper and not see one of the Division’s ads. 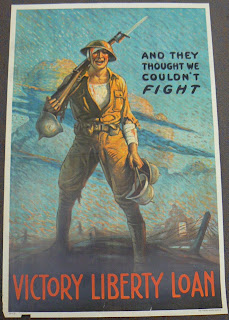 The Division of Pictorial Publicity took its cues from techniques pioneered by the advertising industry. Forget facts; their posters appealed to basic human emotions like fear, duty, guilt, patriotism, and the need to keep up with the Joneses. Most were beautiful, some were humorous, but all of them did their job. CCHS has a collection of over 50 posters, a handful of which are currently on display in the new exhibit Propaganda War in the Education Room. 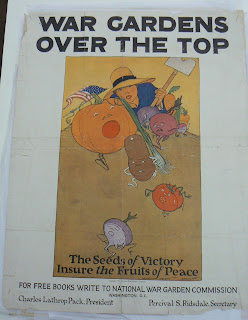 Posted by Chemung County Historical Society at 5:58 AM