Corporal Thomas Beecher Carpenter enlisted in the Army in 1912 and served until 1919. A member of the 103rd engineers, he received shrapnel wounds, was gassed, and suffered from shell shock while serving in France during World War I. Upon returning, Carpenter still felt the physical and mental effects of his time in the trenches. By 1927, 34-year-old Carpenter had been hospitalized at least 27 times since leaving the Army. Carpenter suffered from debilitating seizures or fits that often required him to be hospitalized and confined to a strait jacket. 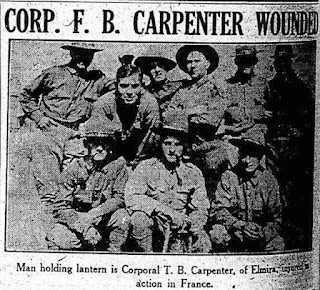 Carpenter was like many World War I veterans who returned from the war facing both physical trauma and what we now know as PTSD. For a while after the war, Carpenter had received disability benefits from the United States Veterans’ Bureau for bronchitis. Those payments stopped in 1923, however, and Carpenter was unable to prove that his other more serious ailments were the direct result of his service. Carpenter was unable to find employment and grew desperate.


Local Congressman Gale H. Stalker and the Elmira chapter of Disabled American Veterans took up his case in 1927 and successfully petitioned the US Veterans' Bureau for Carpenter to receive $4,000 in back compensation and approximately $70 a month in the future. At the end of the ordeal, Carpenter told Stalker that he remained hopeful that he would be able to be rehabilitated and to find employment.
Carpenter and his fellow injured servicemen were assisted by local chapters of Disabled American Veterans of the World War. The DAV was founded in 1920 to help returning veterans who, like Carpenter, were receiving little or no assistance from the government. The Elmira Chapter, No. 13 of DAV held meetings and fundraisers and advocated for local people like Carpenter. The annual forget-me-not sale was the most popular fundraiser for DAV. Similar to the American Legion’s poppy sales, the forget-me-not sales were a way to get the community involved and were a symbolic reminder of the mission of the DAV.

Posted by Chemung County Historical Society at 4:27 AM