May 22 is Sherlock Holmes Day, a celebration of the birthday of Sir Arthur Conan Doyle, the creator of the genius detective. That got me thinking: are there any local Sherlock connections? Happily, yes, yes there are!

On November 22, 1894, Arthur Conan Doyle delivered a speech in the chapel at Elmira College. Although a reporter from the Elmira Daily Gazette and Free Press stated that "knowledge of his books in this city is not as deep and broad as it might be," people filled the chapel to hear Doyle speak. Doyle shared some of his work, recounted his path to literary fame, and justified his decision to kill Sherlock so that the character didn't overstay his welcome.

If Doyle's work wasn't too popular in Elmira in 1894 as the reporter claimed, it didn't take too long for it to catch on. In fact, soon after, the local newspapers were filled with Sherlock references, jokes, and updates about the detective stories and plays.

In 1914, Elmira's Gosper-Kelly Shoe Store used the detective in one of its ads.

There were also references to local Sherlock-like detective work (or the need for it). A satirical piece in early 1894 recounted a man's Holmes-esque attempts to solve the mystery of odd footprints in the snow in Wisner Park. In 1897, the Owego Record suggested the city might want to get a version of the famed sleuth to deal with its unsolved murder problem.

In perhaps the oddest story, in 1913, Elmira Humane Officer John Dilmore was hailed as a local Sherlock Holmes for his deductive skills. Investigating a residence on John Street, Dilmore confronted the owner about not feeding his duck. The owner asked how Dilmore knew he hadn't fed it and Dilmore replied that it hadn't snowed since five days past and there weren't any duck prints in the snow to the feeding area. Dilmore said the man needed to feed the duck or kill it, so the man killed it. 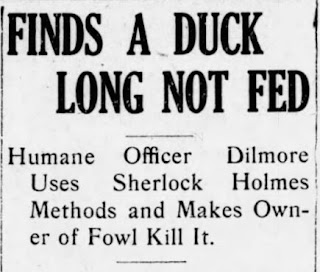 Posted by Chemung County Historical Society at 5:42 AM