When you hear the name LaFrance in Elmira, most people think of fire engines but the name was also associated with flowers. The LaFrance Carnation Company operated here from 1906 to 1915. The company was founded by T. Everett LaFrance and Frederick L. LaFrance, sons of Truckson LaFrance who was one of the cofounders of the famous fire engine company.

T. Everett was a machinist and engineer before getting into the watchmaking and jewelry business in the late 1880s. In 1895, he was a partner in LaFrance & Swarthout Jewelers at 100 W. Water Street in Elmira. His brother Frederick started out as a coppersmith before taking a job at a florist on Maple Avenue in 1897.

In the spring of 1906, the brothers formed the LaFrance Carnation Company and announced that they would be constructing a 30,000 square foot greenhouse on E. Miller Street. In early June, they broke ground for the greenhouse where they would grow carnations for the wholesale market. The entire product of the new venture was already promised to two firms in New York City and Philadelphia. The company was officially incorporated in 1907 with F.L. LaFrance, T.E. LaFrance, and Della A. Kent (their sister) listed as the owners. 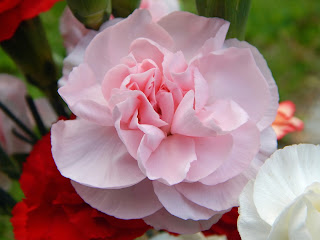 Tragedy struck on July 28, 1907 when Frederick died unexpectedly of a heart attack. His father had died ten years earlier in the same manner. Frederick left behind his wife Sarah, and two children, 11-year-old Eleanor and 9-year-old Delia.

T. Everett and his sister Della continued to operate the Carnation Company and expanded the business into retail sales. In 1909, they opened an office at the Longmate Jewelry store at 139 W. Water Street to sell cut flowers for all occasions. They also sold tomato plants out of the greenhouse on Miller Street. Business seemed to be going well at that time. Several help-wanted advertisements appeared in the local newspaper seeking workers. The company sought to hire two boys, 16 or 18 years old, to work at the greenhouse for 75 cents a day and two good strong men for $1.50 a day.

When Walter Longmate decided to close his jewelry store and move out of the city in 1910, T. Everett made arrangements to lease a storefront at 100 E. Water Street. They were able to make the move and open LaFrance Florist in time for Easter, a major flower holiday. At that time, Della served as president of the LaFrance Carnation Company and T. Everett was secretary and treasurer. Two years later, the city directory listed T. Everett as vice president of the company and manager of LaFrance Florist. Della no longer appeared to be involved in the business.

Business seemed to have taken a turn for the worse in those years. In May 1913, and again in August of the same year, the LaFrance Carnation Company greenhouse on E. Miller Street was listed as part of a tax sale. The United State Cut Flower Co. purchased the greenhouse and continued its operation through 1919. T. Everett run LaFrance Florist until 1915 when Mrs. C.W. Mathews took over the business. The next year, LaFrance Florist was purchased by Katherine Jackson who ran the business for 26 years until 1942. T. Everett does not appear in any city directories after 1915. 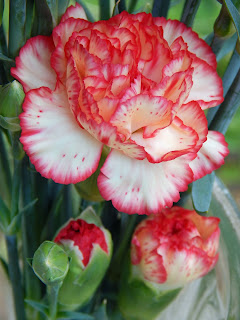 Posted by Chemung County Historical Society at 5:17 AM