The Changing Story of History

At its core, history is the story we choose to tell ourselves about the past. Although the actual facts of what happened do not change, the history, that story, does. Sometimes it changes as new information comes to light or as new perspectives are incorporated. Other times, it changes to fit the political or social needs of the day. No history taught in American schools has ever been a complete or even entirely accurate depiction of the past as it actually occurred.

The Chemung County Historical Society has a decent collection of American history textbooks ranging in date from 1859 to 1969. One of them, A Brief History of the United States (1885) was written by Elmira’s own Joel Dorman Steele, the man for whom the Steele Memorial Library was named. Each of these books have slightly different takes on certain key moments in American history. For example, here is how each of the books describes the signing of the Declaration of Independence: 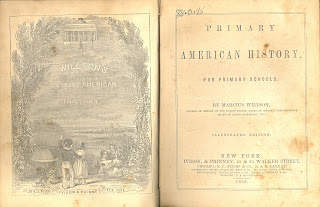 On the 4th of July, 1776, the American Congress, then in session in Philadelphia, made the ever memorable declaration of independence, by which the thirteen American colonies declared themselves Free and Independent, under the name the Thirteen United States of America.

This declaration was a bold movement on the part of those who made it, as it was known that Great Britain would regard the act as treason, a crime punishable by death. When the members of Congress were about to sign this instrument, John Hancock, one of their number, remarked, “We must be unanimous; there must be no pulling different ways; we must all hang together.” “Yes,” replied Franklin, indulging in a witticism on the words, “we must, indeed, all hang together, or, most assuredly, we shall all hang separately.”

This 1859 account also includes several paragraphs describing the ringing of the Liberty bell, the atmosphere of celebration in the streets, and how, henceforth, Thomas Jefferson only celebrated America’s birthday, but not his own. 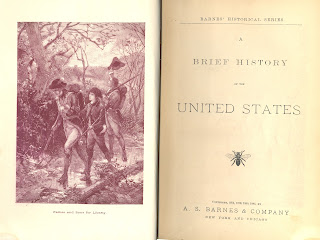 Declaration of Independence (July 4, 1776) – During the session of Congress this summer, Richard Henry Lee, of Virginia, moved that “The United Colonies are, and ought to be, free and independent States”; John Adams, of Massachusetts, seconded the resolution. This was passed (July 2). The report of the committee appointed to draw up a Declaration of Independence, was adopted, July 4.

-A Brief History of the United States by Joel Dorman Steele, 1885

This 1885 account included a series of footnotes. The first listed who was on the committee and the second included a humorous antidote about the ringing of the Liberty Bell. 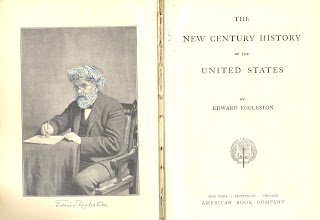 By the spring of 1776, after a year of war with their king, the feelings of the patriots had changed. By advice of Congress the colonies adopted State governments for themselves, and Virginia instructed her delegates to propose to Congress the adoption of a Declaration of Independence. Obeying this instruction, Richard Henry Lee, of Virginia, in June 1776, offered a resolution "that these United Colonies are, and ought to be, free and independent States, that they are absolved from all allegiance to the British Crown, and that all political connection between them and the State of Great Britain is, and ought to be, totally dissolved.”

Congress appointed a committee to draw up a formal Declaration of Independence. Thomas Jefferson, of Virginia, drew up the document, and it was presented to Congress on July 2. After some sight changes, the declaration was adopted by Congress on July 4, 1776. It was signed on that day by John Hancock, president of Congress, and a little later by the delegates of all the colonies.

-The New Century History of the United States by Edward Eggleston, 1907

This section on the Declaration in this book begins with a paragraph explaining how the Colonists initially wanted redress rather than independence. It ends with two paragraphs summarizing what, exactly, the Declaration of Independence said as well as it’s reception by the British. 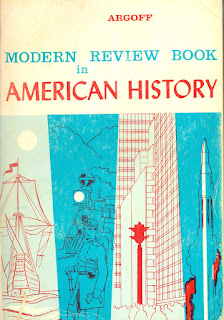 King George III rejected the “olive branch” petition of the colonists, asking for a redress of grievances. Moreover, the King hired 20,000 Hessian troops and sent them to America. By this time, many Americans were convinced that there would have to be a clean break with England.

In June, 1776, Richard Henry Lee of Virginia reintroduced a resolution before the Continental Congress that “the United Colonies are and ought to be free and independent states.” Thomas Jefferson was appointed to prepare a statement expressing this principal. The Declaration of Independence was adopted on July 4, 1776 and signed by 56 members of the Second Continental Congress, led by the President, John Handcock. This date is, therefore, regarded as the “birthday” of the United States.

This book includes a summary of what was actually in the Declaration.

The authors of each of these books made different choices about who and what was important about the signing of the Declaration. They also made choices about which events were important enough to include at all. For example, A Brief History of the United States (1885) and The New Century History of the United States (1907) both include a paragraph about the arrival of the first enslaved Africans in 1619. Modern Review Book in American History (1969) has an entire chapter devoted to the history of African Americans, but Primary American History for Primary Schools (1859), scarcely mentions slavery at all.

What we as a society choose to include in the story that is our history can have a profound effect. A history which leaves out the contributions of women gives the impression that women have nothing to contribute. A history which ignores the impact of racism makes people less equipped to dismantle racist systems and a history which focuses solely on the role of so-called great men makes people less likely to see the value of collective action. Personally, I think expanding our understanding of history to include the perspectives and lives of multiple groups not only gives us a more accurate understanding of the past, but it can help us build a more inclusive future.

Posted by Chemung County Historical Society at 7:20 AM