The Jewish holiday of Hanukkah is just wrapping up.  Like many Jewish holidays, Hanukkah celebrates perseverance in the face of religious oppression.  Similarly, the early Jewish settlement in the Chemung Valley is a story of survival and growth in the face of oppression.   The first Jews arrived in the area following a failed revolution in the German states in 1848.  The revolution was an attempt on the part of the merchant middle class and the poorer working classes to unite the various German-speaking states into one democratic county.   It was put down by the aristocratic powers and was followed by an anti-Semitic backlash.

Most of the Jews who fled to America arrived in New York and Philadelphia and spread out from there.  By the early 1850s, the Erie Railroad had connected Elmira with New York and so the Jews came.  The earliest settlers worked as peddlers.  Some of them, especially those with families, established homes in Elmira and from there traveled by foot to outlying villages and settlements selling jewelry and other fancy goods not available in general stores.  After they’d gained enough money, many would settle down with a shop in a favorite village or return to Elmira to open up a store.  Rosenbaum’s, for example, was opened in 1863 by former peddler Leham Rosenbaum.

By the 1860s, after years of worship in private homes, the Jewish community pulled together enough funds to build a synagogue.  It was called B’Nai Israel and was located on High Street on Elmira’s eastside in the heart of the Jewish community.  Initially, there were only 31 families in the congregation, but it grew steadily throughout the 1860s & 70s. 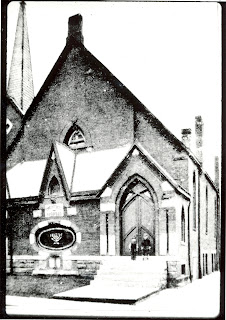 A second wave of Jewish settlers arrived in the 1880s and 90s, this time from Poland and Russia.  Throughout the 1880s, Eastern European Jews were plagued both by violent mob attacks and increasingly harsh anti-Semitic laws which restricted where they could live, what jobs they could have and how much education they could receive.  Between 1881 and 1920, over 2 million Jews fled Russia and Poland for the United States.

While the members of this second wave who settled in Elmira moved into the same eastside neighborhood as the more established Jewish families, they didn’t blend seamlessly.  The members of B’Nai Israel practiced Reform Judaism while the newer immigrants were Orthodox.  This lead to the founding of a new Orthodox temple called Shomray Hadath in 1883.  By the next year there was a third temple known as the Sullivan Street Synagogue and Talmud Torah which eventually merged with Shomray Hadath after a fire destroyed their building in 1941.

Beginning in the 1930s, the Jewish community began to move west out of the old eastside neighborhood centered around John Street.  First B’Nail Israel in 1952 and then later Shomray Hadath moved out to West Water Street.  Due to dwindling populations, the two congregations have recently merged to form Kol Ami. 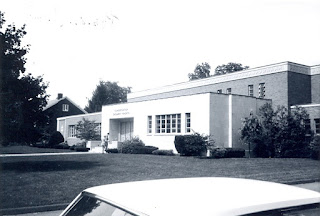 Posted by Chemung County Historical Society at 6:19 AM