In Chemung County the Diven name is associated with state and local politics, the Civil War, and education, but one Diven received national recognition for his work with water. Fifty years after his death, John Malvina Diven was inducted into the National Water Industry Hall of Fame for his contributions to the field of water management. He had worked in the field for more than half a century despite having no formal engineering training.

The Divens first arrived in Chemung County in the 1830s, when Alexander S. Diven moved to Elmira to practice law and married a local girl, Amanda Malvina Beers. Among his many accomplishments, he was an officer in the Civil War; Elmira’s 11th mayor; a member of the U.S. House of Representatives from New York’s 27th District; an elected member of the New York Senate; and a board member for various educational institutions and companies. The community and his family were important to him.
When Alexander was 43 years old, his eighth and youngest child, John, was born. It was 1852. Six years later, Alexander and his oldest son, George, made an investment that would change John’s life. They invested in the county’s first water supply system, operated privately by a company known as the Elmira Water Company (EWC) and located at the corner of Baldwin and Water Streets.

The EWC system delivered water to Southside homes and businesses near the Chemung River. In mid-19th century America, there were only 83 public water supply systems in existence. Like Elmira’s, 50 of these were privately operated. It wasn’t that the idea of a reliable water system was new - its importance had been known since Roman times. It was a question of who had responsibility for delivering that water.

The Elmira Water Company had been chartered in 1859, when the NYS legislature incorporated the company allowing them to raise capital. The area’s population was growing, and its 7,000 residents were expecting reliable water. The EWC system relied on gravity to draw water directly from nearby Seeley Creek, using state-of-the-art wooden pipes from Wyckoff Bros. (later Wyckoff & Son’s), a company, based on Water Street in Elmira. 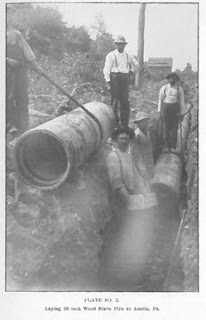 Arcalous Wyckoff, owner, engineer, and founder of the successful pipe company, held patents for a specialized boring machine used to make wooden pipes. He was also an initial investor in the water company and lived with his family in an imposing mansion on the Southside. His home is gone now, but is the current location of Fagan Engineers & Land Surveying, a civil engineering company.

Despite public interest and popularity, the water company faltered. Determined it would succeed, investors including the Diven family then formed the Elmira Water Works Company in 1869. They added another system to supply the city’s Northside and downtown area that would draw water from a Chemung River reservoir near Hoffman Street.

The Diven family bought out other investors and became major stakeholders in the company. They built a 100-million-gallon reservoir on Upper Hoffman Street and added a pumping line down Water Street to assist during dry spells. John had been working at the company, and though he didn’t have training in civil engineering, he was appointed water superintendent in 1875. Under his leadership the company installed a water pumping station and filter plant.

In 1886, hoping the city would take over operations, the Divens offered the water company to the City of Elmira for $400,000. The city turned them down.

Six years later the Municipal Improvement Co. purchased stock in the company and took over operations. John was kept on as superintendent. 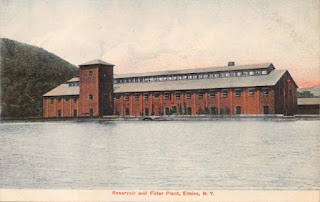 In 1896, the Elmira community battled a terrible typhoid outbreak which resulted in 46 deaths. To prevent future outbreaks, the water company added one of the country’s first mechanical filtration plants, locating it next to the reservoir. It included 18 units of rapid sand filters. This barrier process, newly discovered in the 1890s, helped protect municipal water supplies from contamination and avoided spreading waterborne illnesses. It also required less land for operations.

In 1904, all the utilities in the Elmira area were consolidated into the Elmira Water, Light, & Railroad Company. John Diven continued to serve as water superintendent until 1905, when he left Elmira to take a similar position in Charleston, South Carolina. He was there for several years before moving to manage the water system of Troy, New York, for another seven years. During this time, the family suffered the loss of two infant children. Sadly, after moving to New York City to take a break, Susan died in 1921. John married Charlotte Sophia Edgley in 1922 and they returned to Troy, where he managed the water system until a year before he died in 1925.

In addition to being water superintendent, Diven owned a furniture company and was a member of the New York State assembly. He was a founding member of the American Water Works Association and served in leadership positions until 1924.

In 1973, the National Water Industry Hall of Fame, also known as the Water Utility Hall of Fame, honored John M. Diven as the 15th American to make significant contributions to the field of public water. 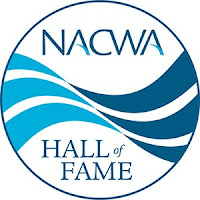 A plaque, accepted by his son, was given to the Elmira Water Board to hang in their offices. Today the John M. Diven award from the American Water Works Association is presented yearly to a New York member for outstanding services.

John M. Diven has two headstones. One is part of the family plot located at nearby Woodlawn Cemetery. This stone is next to his first wife, Susan, and infant daughters. A second headstone is in Oakwood Cemetery, Troy, NY, where his second wife Charlotte is buried. She outlived him by 25 years.